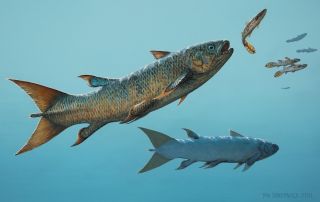 A coelacanth species discovered in British Columbia is the only known version of this ancient fish to boast a forked tail. The fast-swimming coelacanth Rebellatrix chasing smaller species of fishes in the Early Triassic ocean west of Pangaea.
(Image: © Michael Skrepnick)

A new ancient fish with a sharklike tail discovered in Canada was a fast-moving, aggressive predator, quite unlike its sluggish relatives today.

Today's coelacanth (Latimeria chalumnae) is famous for being a "living fossil." Researchers thought these large, paddle-tailed fish had gone extinct during the Cretaceous period — until a fisherman caught a living coelacanth off the east coast of South Africa in 1938.

Modern coelacanths, and most fossilized species, are slow moving, "lay-in-wait" type of predators, according to study researcher Mark Wilson, a paleontologist at the University of Alberta in Canada. But the new specimen, dubbed Rebellatrix divaricerca, had a forked tail, much like today's tuna or sharks.

"Fish with forked tails are able to achieve higher speeds and sustain them over a greater period of time," study researcher Andrew Wendruff, also of the University of Alberta, wrote in an email to LiveScience. "The forked tail of Rebellatrix indicated that it was a fast-moving, aggressive predator." [Images of the Rebel Coelacanth]

No other coelacanth in the fossil record sports a forked tail, Wendruff said.

Rebellatrix "shatters the commonly held notion that coelacanths were an evolutionarily stagnant group in that their body shape and lifestyle changed little since the origin of the group," he said. "Rebellatrix is dramatically different than anything previously known."

For all its evolutionary audacity, Rebellatrix was likely a "spectacular failure in the evolution of cruising predation," Wendruff said. The fish evolved after the Permian mass extinction, which occurred about 252 million years ago and killed off more than 90 percent of all marine species. It likely filled a niche vacated by the mass extinction, Wendruff said, but this honeymoon period didn't seem to last long. There is no record of Rebellatrix or its descendents in the later fossil record.

The researchers discovered several fossilized Rebellatrix specimens and fragments in and around Wapiti Lake Provincial Park in British Columbia. They acquired another specimen, also found in the park, from a collector who had owned it since the 1950s. At the time the fish was alive, the park area would have been an ocean off the west coast of the supercontinent Pangaea.

The fish was about 4.3 feet (1.3 meters) long with a slender body and the thick fins still seen on coelacanths today.

John Long, a fossil fish expert at the Natural History Museum of Los Angeles County, who was not involved in the research, praised the find.

“This is an amazing discovery which overturns the age-old image of coelacanths as slow-moving fishes, and shows the resilience of the group to come back in true fighting form after surviving the world’s most devastating mass extinction event,” Long said in a statement.

The researchers reported their work in the Journal of Vertebrate Paleontology.