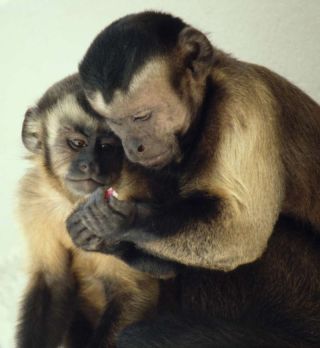 Monkeys can understand the needs of others, a finding that could shed light on the origins of how we truly "get" others, researchers say.

The advanced capability humans possess to understand what others might know, called "theory of mind," is one trait often said to set our species apart from others. Still, aspects of the theory of mind have been seen in close relatives such as chimpanzees.

Monkeys, which are somewhat distant relatives of humans, are rarely tested for behavior as complex as theory of mind. However, researchers now find that monkeys appear capable of simpler, related behavior — sensitivity to what others might want and need.

Scientists tested brown capuchin monkeys (Cebus apella), a large-brained South American primate, and one of the very few primate groups in which unrelated adults often peacefully share food in the wild and in captivity. In the study, some of the capuchin monkeys had a view of other monkeys eating apple pieces, while other participants had their views of the apple-eating blocked.

"It is the first study of its kind, looking at the understanding of needs, desires, intentions of others, rather than knowledge," said researcher Frans de Waal, a primatologist at Emory University.

The investigators found the simians were about half as willing to share food with another if they knew the other had just eaten.

"The monkeys share food not [by] just responding to the partner's behavior in front of them, but taking past events into account as well," said researcher Yuko Hattori, a primatologist at Kyoto University's Primate Research Institute in Japan.

Sensitivity to the needs and wants of others "would be beneficial when resources are limited," Hattori told LiveScience. "For example, you could find a sated partner who still requests food, so you can reduce the food to a fair amount and use limited resources more effectively."

The scientists detailed their findings online April 12 in the journal Behavior.