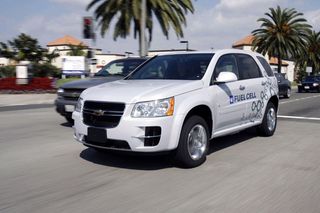 More than 100 Chevrolet Equinox Fuel Cell electric vehicles will be deployed by General Motors in the streets of Los Angeles, New York City and Washington, DC in the largest market test of fuel cell vehicles of its kind.
(Image: © General Motors.)

In 2003, President George W. Bush called for a billion-dollar initiative to make fuel cells the future replacement of the gasoline engine. These clean battery-like devices produce electricity by combining hydrogen and oxygen and giving off only water.

But four years down the road, not many besides California's Gov. Arnold Schwarzenegger have been behind the wheel of a fuel-cell car, and a big reason for this is the paucity of hydrogen fuel filling stations.

Not waiting for the so-called "hydrogen highway" to be built, GM has launched its own Project Driveway, in which 110 Chevy Equinoxes equipped with hydrogen fuel cells will be lent—at no charge—to ordinary customers for 3-month test periods.

To provide fuel, the company is installing—largely at their own expense—10 hydrogen stations in the Los Angeles and New York areas, where Driveway participants can fill up for free.

The goal of Project Driveway is to obtain consumer feedback on fuel-cell cars, but it highlights a troublesome "chicken and egg" problem: Consumers will be reluctant to buy a fuel cell car if they don't see enough hydrogen stations around, while fuel suppliers will be reluctant to build hydrogen stations if they don't see enough fuel-cell cars around.

Jeroen Struben from the MIT Sloan School of Management has studied this and other market forces and found that they can prevent the transition to a non-gasoline infrastructure.

The fact that people can fill their gasoline-powered cars at some 170,000 stations nationwide provides a sense of security that alternative fuels will need decades to achieve, Struben said.

Although limited in scope, Project Driveway is the largest fuel-cell demonstration so far. General Motors has invested more than a billion dollars in the technology, hoping to capitalize on its unique advantages, Gross said.

Compared to battery-powered vehicles, fuel-cell cars can be driven farther (the Equinox can go 150 miles on a full tank of 9.3 pounds of hydrogen). To get that sort of range, a battery must be combined with a gasoline engine, as in a hybrid electric vehicle.

However, this is only true if the hydrogen is generated from renewables, such as wind and solar energy. Currently, most hydrogen is extracted from natural gas—a process that results in about as much carbon dioxide emissions per mile driven as does burning gasoline in a car, Struben said.

As far as price, hydrogen could be competitive with gasoline, once the infrastructure is in place, Gross said. Most estimates assume that a pound of hydrogen (roughly the equivalent of a gallon of gasoline) will cost $2 to $3.

"Two years ago, $2 to $3 seemed expensive," Gross said, but not anymore with current gas prices.

One concern, though, has been that refueling a fuel cell can be a long and complicated procedure, as hydrogen is a highly flammable gas.

But Gross said that the Equinox can be filled in three to five minutes using a high pressure (700 bar) pump. Drivers can do it themselves, because there's a safety connecter that locks in place to prevent leaks.

The 50 or so hydrogen stations in the United States are typically not open to the public and do not uniformly provide the high pressure that Gross considers necessary. The company is therefore rolling out 10 new stations for the start of 2008 when the first fuel cell Equinoxes will be delivered.

GM officials are already looking ahead to the next wave in 2010 to 2012 when they will release about 1,000 fuel cell vehicles. Gross said that this will require about 40 stations in and around the target areas.

Struben, the MIT researcher, is not sure those will be enough. "You need more stations than the simple calculations would suggest," he said.

In his market simulations, he found that when stations are far apart, people fill up more often just to be safe. This can cause long lines at the pump, which will discourage others from buying a fuel cell car.

To avoid this, government and industry need to provide long-term support to stations, especially in rural areas where "they might not be profitable for the first 10 to 20 years," Struben said.