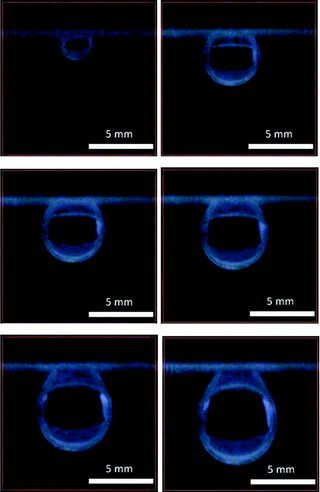 Water can float on oil, suggest new findings defying conventional wisdom that could have important applications in cleaning up oil spills that endanger seashores and fisheries, researchers say.

By making water float on oil, scientists now find that conventional wisdom can be wrong.

The key behind the counterintuitive results involves how tightly the molecules in a liquid stick to one another as opposed to something else. The strength of this force between like molecules determines the liquid's surface tension — how likely it resists an external force. Insects such as water striders can walk on water by taking advantage of this surface tension.

The researchers added tiny amounts of water to drops of various types of oil. These water droplets could float on the oil, depending on how large they were and the type of oil that was used. Commercial vegetable oil has enough surface tension to support the droplets; in contrast, pure mineral oils such as hexane, octane and decane do not. This effect also worked on commercial vegetable oil as long as the drops were smaller than about one-hundredth of a cubic inch — slightly smaller than a pea. [See Video of the Experiment]

Air plays a role as well. The water droplets, due to their weight pressing down on certain parts of the oil drop, create dimples on the oil's surface that allow in pockets of air to help balance the weight of the droplets, keeping them from sinking.

"The implications could be wide for industrial processes where we can use natural forces to support a heavier liquid on top of a lighter liquid," said researcher Chi Phan, an engineer at Curtin University in Australia.

The researchers suggest these findings could help clean up oil spills. They are currently working on applying water droplets to oil slicks, Phan told LiveScience. These droplets can carry oil-eating microbes that could rest on spills and chow down instead of separating away, speeding up cleaning.

The scientists detailed their findings online April 19 in the journal Langmuir.

Editor's Note: This article has been updated to correct the units for density, which were stated as "pounds per square foot," which should be "pounds per cubic foot."