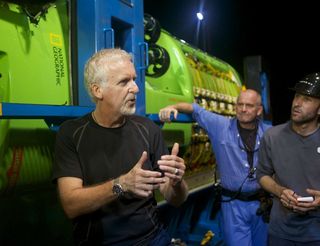 James Cameron talks with his crew in front of the Deepsea Challenger following testing of the submersible in Jervis Bay, south of Sydney, Australia.
(Image: © © Mark Thiessen/National Geographic. )

Barely a month after filmmaker James Cameron piloted a newfangled submersible to the bottom of the Mariana Trench, audiences can get an inside look at the historic expedition that for the first time sent a lone human to the deepest place on Earth.

A half-hour special will air on Sunday, April 29, on the National Geographic Channel, offering viewers a chance to hear Cameron's own account of his seven-hour journey to the seafloor and back.

In an intimate interview, Cameron discusses the moments leading up to his dramatic plunge, and describes his speedy descent. He roared past the depths where the wreckage of the Titanic rests (in the Atlantic Ocean), and at around 21,000 feet (6,500 m), beyond the reach of any other submersible today.

Finally, as the lights from his Deepsea Challenger submersibleset the seafloor aglow, Cameron came to rest at one of the most isolated spots on the planet. That's when the phone rang. It was his wife.

Cameron not only recounts stories like these in the 30-minute program, but offers up footage of the dive itself, and scenes of the hubbub aboard the support ship.

Cameron partnered with National Geographic and watchmaker Rolex to bankroll the endeavor, which was seven years in the making.

"More money gets put into space exploration, but the ocean is our life support here on spaceship Earth," Cameron said in a statement. "And we're destroying it faster than we're exploring it. I think it draws attention to the ocean and the lack of funding for ocean exploration."

The deep sea — roughly defined as everything below 650 feet (200 m) — comprises a stunning 240 million cubic miles (1 billion cubic kilometers) and more than 90 percent of the living space on the planet, and it is virtually unexplored.

Twelve people have walked on the moon, but only three have ever visited the Mariana Trench, the deepest spot on our planet. (The other two visited in 1960, aboard the bathyscaphe Trieste.)