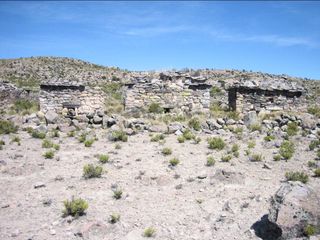 Genetic analyses of individuals buried in funereal monuments near a volcano in southern Peru have revealed the family relationships and burial traditions of ancient Peruvians that lived before Christopher Columbus sailed to the Americas.

The ancient Peruvians buried their dead in "chullpas," structures resembling vertical tombs, which can be up to 6.5 feet (2 meters) high. Researchers hadn't known how the individuals buried within one chullpa were related.

Families were organized into "ayllu," a group of relatives that shared common land and responsibilities. Historians think that men retained the ancestral land, and they traded their sisters for wives, in a sort of "sister exchange."

In the new study, researchers from the University of Warsaw, in collaboration with Universidad Catolica de Santa Maria, retrieved and analyzed genomic sequences of 41 individuals buried in six chullpas located 13,000 feet (4,000 meters) up the side of the Cora Cora Mountain in southern Peru. Though the site had been looted, the remains were well preserved by the cold and the dryness of the land, and the researchers were able to isolate DNA from the bones and teeth of 27 individuals. [Top 10 Weird Ways We Deal With the Dead]

They used this information to identify the sex of each individual and compare their genes in order to figure out the family relationships between them. They also compared their DNA with a sample of 700 individuals from contemporary Amerindian populations from South America.

The researchers found that the people from the chullpas were genetically similar to modern Andean populations from Peruvian regions like Puno, San Martin, Ancash and Yungay. European colonization of the area didn't seem to have an impact on the genetics of the people living in the region.

The researchers also found that the family connections between individuals were the strongest within each chullpa, and most likely a given ayllu buried its members in

one chullpa for many generations.

There was an outlier, though. In a third chullpa three different male lineages were found. Comparison of the maternal DNA of these males suggests that two of the males had the same mother but different fathers, and the third male was related to one of the mothers (but not the fathers), probably a half brother.

The researchers explain this oddity in their paper, published online April 23 in the journal BMC Genetics, by saying that "the rules governing marriages and social organization were an idealization, and we cannot exclude a situation that was intentionally or unintentionally violated in some situations."