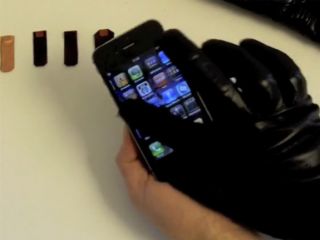 Winter gloves are a problem for smartphone and tablet users. A crowd-funded project aims to make tapping out a text message or checking on email easier in cold weather by modifying anyone's ordinary gloves.

A tiny capacitive sticker that mimics the human body's electricity — the same property that multitouch screens recognize as the natural touch of human fingers — is at the heart of the TapCaps project. Glove wearers could put the final products on their fingertips and use their gadgets in bad weather without freezing their hands.

"The final prototype will be a tiny soft sticker with the subtle design of a fingerprint — I thought this was fitting," said Alice Ning, the TapCaps creator.

Ning aims to create a final prototype with Solaris Design by raising $15,000 on the online crowd-funding website Kickstarter by May 9. A follow-up Kickstarter project Aug. 6 would raise the funding to create the first run of TapCaps.

Today's "conductive gloves" already enable wearers to use touch-screen gadgets, but they can fall apart fairly quickly, and in the meantime they keep people from wearing their favorite cold-weather gloves, Ning said.

She made TapCaps "the size of a thumbnail, as thin as silk, reliable and stable" after running hundreds of tests with different prototypes.

The final prototype would allow glove wearers to choose colors that blend with their gloves or pick a contrasting color as a fashion statement.

Ning mainly works as a management consultant for aid organizations. But her Kickstarter project's description states that her "personal life has been largely spent exploring ideas and inventions" — she made contact with Solaris Design through friends at NASA.

Perhaps Google Glasses or similar heads-up displays with hands-free controls could someday free humans from tapping on their iPhones or iPads at all. But the TapCaps idea may provide a smart, inexpensive solution to keep today's gadget users happy until the world of tomorrow arrives.