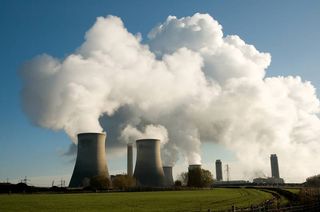 Industrial pollution has been linked with changes in sea-surface temperatures in the Atlantic, which have led to droughts and even hurricanes.
(Image: © stocker1979 | Shutterstock)

Air pollution does more than make the skies hazy, with a new study suggesting the industrial ick is linked to drought, flooding and even hurricanes.

The research, detailed this week in the journal Nature, suggests human activity can, and already has, driven large-scale regional climate changes.

The "dirty pollution," it seems, can cause changes in the temperature of the Atlantic Ocean, which in turn drives the stormy activity, say the researchers from the Met Office, the U.K.'s National Weather Service. To a lesser extent, volcanic activity also drives this temperature variation and subsequent weather phenomena.

The researchers focused on the so-called Atlantic Multidecadal Oscillation, which are shifts in sea-surface temperatures that run in cycles, with warm and cold phases lasting 20 to 40 years; since the mid-1990s we've been in a warm phase, according to the National Oceanic and Atmospheric Administration.

A warm period in this cycle increases hurricane activity in the North Atlantic — warm water acts as fuel for the high-energy storms — and rainfall in parts of Africa, while reducing rainfall in South America. A cold phase has the opposite effects.

"Until now, no one has been able to demonstrate a physical link to what is causing these observed Atlantic Ocean fluctuations, so it was assumed they must be caused by natural variability," lead study author Ben Booth, a climate processes scientist at the MET Office, said in a statement. "Our research implies that far from being natural, these changes could have been largely driven by dirty pollution and volcanoes." [10 Climate Myths Busted]

Using a computer climate model, Booth and his colleagues looked at sea-surface temperatures in the North Atlantic between 1860 and 2005. The model, which simulates physical processes in Earth's atmosphere, reproduced these warm-cold variations in the North Atlantic. The simulations actually showed a clear link between the temperature changes in the Atlantic Ocean and the peaks and troughs in industrial pollution from surrounding countries.

Results showed that industrial aerosols and volcanic activity (to a lesser extent) could explain about 75 percent of these sea-surface temperature variations.

Here's how pollution may be linked with climate, the researchers suspect: Most clouds owe their existence to aerosols that act as tiny seeds (called cloud condensation nuclei) around which water vapor droplets can cling and condense. This mostly happens around natural aerosols, such as sea salts. However, particles in polluted air can also seed clouds. Polluted air holds much higher concentrations of water-soluble particles, and, as such, clouds formed from the polluted air tend to have more, and smaller, droplets compared with "natural" clouds, according to the NASA Earth Observatory.

The small droplets make these clouds look brighter since sunlight has many more surfaces to reflect off. With increased light scattering, these brighter clouds actually keep sunlight from reaching Earth's surface and shade the planet. Result: cooling of the ocean beneath.

If the research bears out, it could redefine some "natural" disasters.

"If so, this means a number of natural disasters linked to these ocean fluctuations, such as persistent African drought during the 1970s and 80s, may not be so natural after all," Booth said.

The researchers do caution, however, that the results are based on one computer model and that further research is needed to firm up the link between industrial pollution and climate.