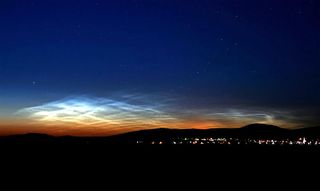 This image shows one of the first ground sightings of noctilucent clouds in the 2007 season over Budapest, Hungary on June 15, 2007.
(Image: © Veres Viktor/NASA)

SAN FRANCISCO—Fifty miles above Earth's North Pole shine the brightest clouds ever observed, and for the first time scientists have taken global-scale images of these so-called "clouds on the edge of space."

These clouds, which form at very high altitudes over the poles in the summer months, have been appearing at lower latitudes and growing brighter and more frequent in recent years, possibly as a result of climate change.

NASA's new Aeronomy of Ice in the Mesosphere (AIM) satellite is dedicated to observing these noctilucent, or night-shining clouds, so-named because they continue reflecting sunlight to the surface even after the sun has set below the horizon.

After its first run, AIM has provided scientists with a global-scale view of these clouds over the course of the entire 2007 Northern Hemisphere summer, yielding some unexpected results, mission scientists said here yesterday at meeting of the American Geophysical Union.

"The AIM mission has changed our view of Polar Mesospheric Clouds and their surroundings after only one season of observations," said AIM leader James Russell of Hampton University in Virginia.

AIM's measurements showed that these unusual clouds had "more variability and structure than expected, signifying extreme sensitivity to the environment in which the clouds form," Russell said.

Noctilucent clouds consist of ice crystals that form when water vapor condenses onto dust particles in air where temperatures can dip to -210 to -235 degrees Fahrenheit. The air in which they form is also very dry—100,000 times drier than the air in the Sahara desert.

Scientists have observed an increase in the appearance of these clouds in both hemispheres and at lower latitudes, and suspect it may be linked to climate change. While increased carbon dioxide levels warm the lower atmosphere, they have a cooling effect on the level of the atmosphere where noctilucent clouds form, possibly providing the clouds with a more friendly environment.

The AIM mission also found that this mesospheric ice seems to occur in one continuous layer from 51 miles to 55 miles above Earth's surface, the mission scientists said.

The AIM satellite is currently observing clouds over the Southern Hemisphere.