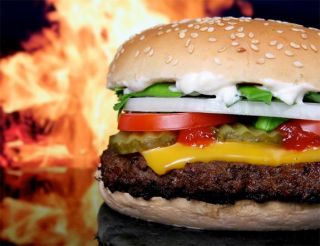 Fatty foods may cause new brain cells to sprout in an area of the brain that regulates eating, finds a new study in mice.
(Image: © Stock.xchng)

Eating too many burgers and fries? Your brain might show the effects, if new mouse research holds true in humans. Researchers have discovered that a high-fat diet causes new brain cells to sprout in an area of the brain that seems to regulate eating.

Interestingly, if the researchers stopped new brain-cell growth, mice gained less weight and stayed more active, even while eating their "supersize me" diet.

"We really don’t understand the function of these neurons in the normal brain," study researcher Seth Blackshaw, an associate professor at Johns Hopkins University School of Medicine, told LiveScience. "Our data suggests that these neurons may have an important role in regulating feeding."

The cells are located in a part of the brain called the median eminence, which lies at the edge of a fluid-filled chamber and therefore outside of the blood-brain barrier (which keeps toxic substances out of the brain), but it extends deep into the hypothalamus. [10 Cool Facts About the Brain]

The hypothalamus plays a role in regulating how our bodies spend the energy they take in and sends out signals to the body through the pituitary gland to control hunger, thirst and behavior.

Because the median eminence is in contact with areas of the body outside the blood-brain barrier, researchers think it may be detecting chemicals in the blood, and transferring signals about the condition of the body into the hypothalamus, which can then make decisions about eating.

The researchers wanted to see how brain cells in the median eminence reacted to a high-fat diet, so they put mice on a "Big Mac" diet — which contained 60 percent fat instead of the 35 percent fat in regular mouse chow.

The mice love the high-fat food. They eat and eat and gain tons of weight, as humans would if we could eat only fast food. In the wild, this would be a good thing in times when food is freely available: The mice can fatten up to stay alive when food is scarce.

The researchers saw that on the high-fat diet, creation of new brain cells in the median eminence increased from 1 percent to 5 percent.

Next, the researchers selectively turned off the new brain-cell creation in this region, and compared these mice with the normal mice on a high-fat diet. When new brain-cell growth was turned off, the mice gained 7 percent less weight and were 15 percent more active than the other mice eating the fatty food.

"We have no idea if this happens in any species other than mice. In humans all the cells and the structures are conserved," Blackshaw said. "I think there's no reason to assume necessarily that this wouldn’t happen in humans, but I would be very careful into reading too much in these studies."

If this small connection to the hypothalamus does play a big role in regulating energy intake and use in humans, it could be a potential target for diet-regulating therapies, especially since it is located on the outside of the blood-brain barrier. If the region were inside the blood-brain barrier, that barrier would filter out any "foreign" chemicals used to regulate the growth of new brain cells there.

"The therapeutic potential [is] quite exciting," Blackshaw said. "The beauty of this region, this median eminence, is that it lies completely outside of the blood-brain barrier. Delivery of therapeutics to target [and] regulate neurons or regulate neurogeneration [the growth of new brain cells] could be made pretty specific."

The study was published today, March 25, in the journal Nature Neuroscience.