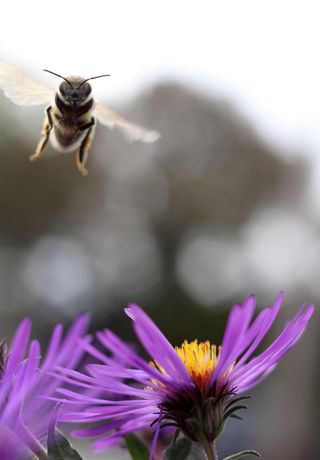 Like humans and other vertebrates, some bees are drawn to adventure while others prefer to play it safe. And now researchers have found what separates the thrill-seekers from the nervous Nellies in honeybees.

The bold bee scouts that go out in search of food for their hive show more activity in certain genes in their brains than do other bees. Some of these "personality genes" match up with those seen in vertebrates, the researchers said.

The honeybee scouts show what researchers call "novelty-seeking behavior" — instead of just feeding on the food they find until it runs dry, they spot a food source, report back to the colony, then go out in search of more.

"They go out and find new sources of food without being directed to those sources, while the non-scouts wait in the hive until they are recruited by a scouter bee," study researcher Gene Robinson, director of the Institute for Genomic Biology at the University of Illinois at Urbana-Champaign, told LiveScience. "They are doing something very different from the rest of their hive mates, even though they live together and they are all very related." [Images of honeybee scouts in flight]

The researchers watched bees discover new food sources and those seen visiting a new food sources at least twice were tagged as scouts. They then analyzed the brains of scouts and non-scouts, looking for differences in the activity of thousands of genes.

They found more than 1,000 differently expressed genes; several were related to three signaling pathways (catecholamine, glutamate and gamma-aminobutyric acid), which are known to regulate novelty-seeking and responding to rewards in vertebrates like humans.

"It is amazing that behavioral differences within bees appear to involve partly the same molecular pathways as in vertebrates, including humans," Staffan Bensch, a professor at Lunds University in Sweden, told LiveScience in an email. Bensch wasn't involved in the current study.

The researchers wanted to see if mucking with these pathways could change the bee's behavior, so they gave the bees drugs that turned up or down the levels of these brain chemicals.

"We were able to increase and decrease the likelihood of scouting, ratchet it up and ratchet it down," Robinson said.

The researchers could increase the likelihood (from 7 percent to 13 percent) that any given bee would act like a scout by increasing the glutamate activity, which is involved in memory and novelty-seeking in humans.

"Even if small, it was significant, and I think it contributes with a strong point of support for the conclusion that glutamate is one of the key molecules" that determines behavior in both vertebrates and invertebrates, Bensch said.

"Novelty-seeking in bees and novelty-seeking in humans share some common molecular roots, but it doesn't mean that one evolved from the other," Robinson said. "They are co-opted by evolution to give a certain type of trait over and over again."

The study was published today (March 8) in the journal Science.