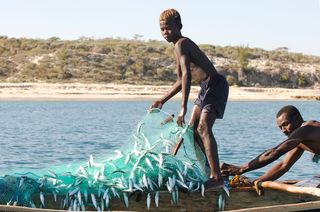 A "roadmap" for preserving marine life around the famously biologically rich island of Madagascar has been proposed in a new study released last week.

Madagascar is one of the poorest countries on Earth yet has proposed to create more than 1 million hectares (3,861 square miles) of protected areas to provide for the long-term conservation of its marine resources, including coral reefs and mangroves.

The new study, conducted by the University of California, Berkeley, the Wildlife Conservation Society and others used what is called (borrowing from the financial world) a "diversified portfolio" approach, to identify what areas need protection and use a variety of strategies to protect them. These options include implementing strict no-take zones (where fishing is completely banned) to areas that would allow fishing.

"It behooves countries, in the face of impending fisheries and climate crises, to plan and implement intelligent management that will increase the resilience of their natural marine resources," said study co-author Tim McClanahan of the WCS. "This paper will provide a roadmap for Madagascar to plan and manage these resources and the methods should prove affordable and useful for the poorest countries where adaptation to climate change will make marine spatial planning a critical part of a successful response."

The method looked at existing information on the country's climate, along with dependence on fisheries and marine resources, and applies three different planning approaches to establish priorities for management along Madagascar's entire west coast.

The study authors said the process provides a more efficient and comprehensive way to plan on a large scale and they found that several marine areas in Madagascar are conservation priorities across all methods.

These conservation priorities included coral reefs in the vicinity of the Barren Islands, the large shallow banks to the northwest and southwest, and the reefs of Juan de Nova.

The study also found endangered regions due to heavy human pressure in the south, and areas of high climate variability intermixed with lower vulnerability but high biodiversity in the northwest. Areas of particularly high biodiversity value include the islands, reefs and bays of the northwest; the fringing reefs of the southwest; and the barrier reefs and islands of the central west coast.

The study was published in the Feb. 16 issue of the journal PLoS One.