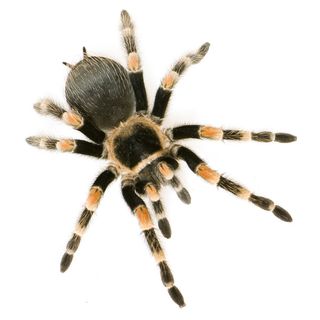 A Brachypelma smithi tarantula, one of the species used in a study which found that people who are afraid of spiders overestimate the size of spiders they have encountered.
(Image: © Eric Isselée | shutterstock)

Fear can distort our perceptions, psychological research indicates, and creepy-crawly spiders are no different. People who are afraid of spiders see the arachnids as bigger than they actually are, recent experiments have shown.

Researchers asked people who had undergone therapy to address their fear of spiders to draw a line representing the length of a tarantula they had just encountered in a lab setting.

"On average, the most fearful were drawing lines about 50 percent longer than the least fearful," said Michael Vasey, lead study researcher and professor of psychology at Ohio State University. "We have seen participants draw lines that are at least three times as long as the actual spider." [What Scares You? (Infographic)]

After undergoing exposure therapy — in which people confront something they fear, in this case, spiders — 57 people with spider phobia were given the task of approaching a spider in an aquarium, then using a 4-inch (10.2 centimeter) probe to nudge it around the tank. They repeated this encounterfive times with different species of spider over eight weeks.

During the task the arachnophobes periodically rated the distress they were experiencing on a scale of zero to 100, with zero being no distress. Afterward, the spider was covered up and the participants filled out questionnaires and drew a line on an index card to represent the length of the spider, from tips of the front legs to tips of the back ones, they had just encountered.

Because the tarantulas were covered up while the participants drew, the results of this study, which appeared in the January issue of the Journal of Anxiety Disorders, left an important question unresolved: Were the results due to a distortion of the arachnophobe's visual perception of the spider or their memory of that spider?

To clarify, in more recent experiments, Vasey and his colleagues asked participates to draw the length of the spider while looking at it. This did not change their results, indicating their visual memory was being affected.

"There is some variability, but among individuals most afraid of spiders we have seen some pretty radical overestimates," Vasey said.

Researchers already suspected a connection between fear and altered visual perception; for instance, previous research has shown that people with a fear of heights tend to overestimate the distance below them when looking down from a balcony. But this new work makes it clear the phenomenon extends to arachnophobia and likely other animal phobias.

The distortion may serve a purpose, according to Vasey. After a near miss with a venomous snake or with a bus, seeing either as larger or more threatening might help you learn to be more cautious. However, the same bias could become harmful. For instance, if your fear leads you to overestimate the size of something that is not very dangerous or if the bias becomes self-re-enforcing, according to Vasey.

Identifying the things that maintain phobias or aggravate them can be used to help treat these problems, he said.