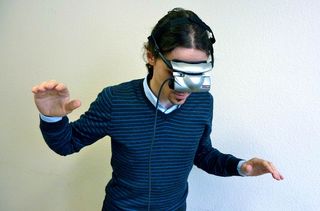 Pills made up of a stress hormone could actually help one fight anxiety and fears.

Nowadays clinical psychologists often treat phobias by using "exposure therapy," in which the patient is repeatedly exposed to frightening scenarios in a controlled manner. This gradually replaces the memories of being afraid in similar circumstances with ones in which there was no reason to be scared. Recently, such techniques have been augmented with virtual reality, which immerses patients in computer-simulated, three-dimensional versions of these situations.

To see whether exposure therapy could be improved even further, cognitive neuroscientist Dominique de Quervain at the University of Basel in Switzerland and his colleagues experimented with a hormone known as cortisol. Past studies suggested that this compound, released by the human brain during stress, can affect learning — perhaps helping people generate new memories that would interfere with past ones of being frightened.

The researchers tested 40 people who had been clinically diagnosed with acrophobia, or fear of heights. The patients underwent three sessions of virtual-reality-based exposure therapy that simulated an outdoor elevator ride.

An hour before each treatment session, half the volunteers took a tablet of cortisol, while the other half received a placebo. (The study was randomized and double-blind, meaning participants were randomly assigned to either the hormone or the placebo and neither they nor the researchers knew who had which "treatment.")

About four days after the last session, and again after about one month, the scientists tested the patients' fear responses with questionnaires and measurements of the electrical conductance of their skin (an indication of stress).

At both the four-day and one-month marks, de Quervain and his colleagues found the volunteers who took cortisol experienced significantly less anxiety than the ones who did not.

"I am excited that a hormone, which we found to affect certain memory functions in rodents, also affects learning and memory processes that occur during psychotherapy in patients with phobia," de Quervain told LiveScience. "The findings indicate that psychotherapy can be enhanced by pharmacotherapy.

"More studies are now needed to explore the therapeutic potential of cortisol in combination with psychotherapy in the treatment of anxiety disorders — for example, different types of phobias and post-traumatic stress disorder," de Quervain added.

The scientists detailed their findings online today (March 28) in the journal Proceedings of the National Academy of Sciences.