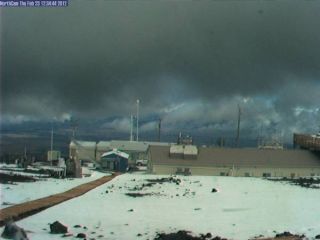 Snow continued to fall today in a place that most people do not associate with the white stuff: Hawaii.

Snow covered the top of Mauna Kea on the Big Island, one of the five volcanoes that form Hawaii, as seen by U.S. Geological Survey (USGS) webcams atop the mountain. The snow was so thick that the road to the summit area of Mauna Kea was closed, according to news reports. Snow on the summit should remain through the weekend, but the roads are expected to reopen.

Snow here is not actually all that unusual. Mauna Kea is nearly 14,000 feet (4,200 meters) above sea level, making it the highest peak in Hawaii (if measured from the seafloor, it's the tallest mountain in the world). This mountain is known for snow — its name means "white mountain" in Hawaiian. According to Hawaiian mythology, Poli'ahu, a goddess of snow, lives here.

"It's winter time," Derek Wroe, a forecaster with the National Weather Service told the Honolulu Star Advisor. "Temperatures are colder than normal, but not unusual for this time of year."

The summits' temperatures often dip well below freezing during the winter, and sometimes even into the summer. In June 2011, Mauna Kea had its first June snowfall in decades.