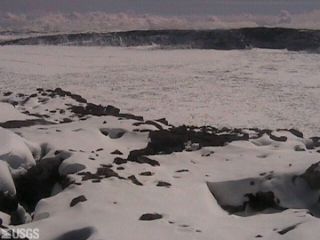 Snow may be lacking from most of the United States, but one state had a snowy Presidents Day: Hawaii.

Snow covered the tops of Mauna Loa and Mauna Kea, two of the five volcanoes that form Hawaii, as seen in photos from the U.S. Geological Survey.

Mauna Kea is nearly 14,000 feet (4,200 meters) above sea level, making it the highest peak in Hawaii (if measured from the seafloor, it's the tallest mountain in the world). This mountain is known for snow — its name means "white mountain" in Hawaiian. According to Hawaiian mythology, Poli'ahu, a goddess of snow, lives here. Mauna Loa is slightly shorter.

The summits' temperatures often dip well below freezing during the winter, and sometimes even into the summer. Even a June snowfall on Mauna Kea is possible. In June 2011, Mauna Kea had its first June snowfall in decades, according to Ryan Lyman, a forecast climatologist at the Mauna Kea Weather Center.

"It's the first June snow event we've had in probably close to 30 years," Lymantold Life's Little Mysteries at the time, "but there have been episodes in July and August as well as late May."

That formula could return today (Feb. 21). The National Weather Service has issued a winter weather advisory until 6 p.m. local time for the Big Island summits above 1,000 feet (300 m). Snow showers with up to 2 inches (5 centimeters) of accumulation and brief periods of freezing rain are expected.