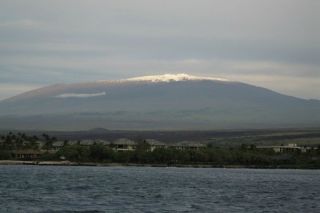 A view of the Mauna Kea volcano of Hawaii from the ocean.
(Image: © Vadim Kurland)

It snowed in Hawaii on Saturday — yes, this Saturday. In June.

Hot air met cold above Mauna Kea, one of several volcanic island mountains that make up the Hawaii island chain, causing a powerful thunderstorm that, in the presence of the cooler-than- normal air, dropped roughly 6 inches of snow on the mountaintop. "The ground coverage was significant, mostly above 12,000 feet," Ryan Lyman, a forecast climatologist at the Mauna Kea Weather Center, told Life's Little Mysteries, a sister site to LiveScience.

One might wonder: how is late spring and summer snow in the tropics even possible?

June snowfall on Mauna Kea is rare but not unheard of, experts say. "It's the first June snow event we've had in probably close to 30 years," Lyman said, "but there have been episodes in July and August as well as late May."

"[The snowstorm] was associated with a pool of cold air in the upper atmosphere that came down from the mid-latitudes," said Steven Businger, chief meteorologist at the Storm Evolution and Energetics Research group at the University of Hawaii Manoa.

"As the land heated up throughout the day, the surface air started to rise," Lyman said, and when the warm surface air encountered the pool of cold air in the upper atmosphere, that produced a thunderstorm — and the snow.

"This happens from time to time, but more commonly in the wintertime than the summer," Businger said. The reason why it's able to happen in the summer at all, he explained, is Mauna Kea's high elevation. "Keep in mind that Mauna Kea is close to 14,000 feet high, so the temperature at the top is not much warmer than freezing for most of the year."

Because the daily temperature at the summit runs from 0 degrees Fahrenheit to 60 F from April to November, snow during the spring and summer is "within the range of 'relatively normal,'" Businger said.