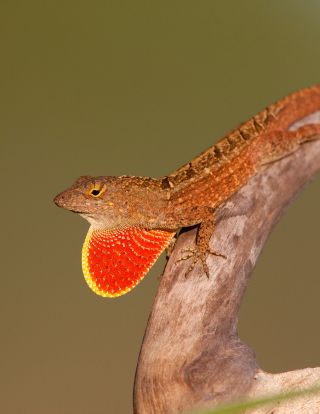 Like something out of a reality-TV show, scientists released pairs of small lizards onto tiny uninhabited islands in the Bahamas and watched what happened. Rather than playing for money or fame, the reptiles played for survival, allowing the voyeuristic researchers to witness the interaction between evolutionary processes rarely observed in nature.

After several years and multiple generations of lizards, the researchers found that both natural selection — whereby traits that enhance survival get passed down from generation to generation — and random processes contributed to the animals' genetics and their physical characteristics.

"We were actually able to see these processes and document them happening in a natural environment," Jason Kolbe, a biologist at the University of Rhode Island who led the study, told LiveScience. "We know that islands are colonized by new species over time, but we are rarely there to see it happen."

When a few individuals of a species colonize a new area, their offspring undergo what is known as the founder effect, which is a change in genetics or physical characteristics. Because of the small number of founding individuals, the new population experiences a loss in genetic variability, often resulting in individuals that are physically and genetically different from their source population.

In addition to random processes like the founder effect, which has everything to do with the random genes that get passed down from the first individuals on the island, populations also experience natural selection, where they adapt to their environment and pass on beneficial traits to their offspring.

But just how much of the evolutionary divergence in separated populations is due to the founder effect and how much is from natural selection?

To find out, Kolbe and his colleagues randomly selected male-female pairs of brown anole (Anolis sagrei) lizards from Iron Cay, an island in the Bahamas, and released them on seven smaller islands in 2005. The smaller islands, whose lizard populations had been wiped out by a recent hurricane, are very similar to one another, populated by the same types of insects, birds and vegetation (short scrubs), but very different from Iron Cay, which is forested.

Previous research has shown that forest anoles have longer hind limbs than their scrub cousins — long limbs allow lizards to move quicker across thick branches, while short limbs give lizards the stability they need to walk along narrow perches.

The researchers predicted that over time, the lizards in their experiment would develop shorter hind limbs than those of the lizards on Iron Cay, but they didn't know what role the founder effect would play in the matter.

Over the next four years, Kolbe and his team measured the limb lengths and analyzed the genetic material of tissue samples from the brown anole lizards on Iron Cay, the seven experimental islands and 12 nearby islands (which served as controls to make sure that any changes they observed in the experimental-island lizards weren’t indicative of natural changes in the species).

After the first year of the study, the researchers immediately noticed a founder effect — the offspring of the original lizards plopped onto the islands in 2005 had less genetic variability than the Iron Cay lizards.

"There were also significant differences in hind-limb length among the islands, even though the lizards were all from same source population," Kolbe said. Since the founder effect is a random process independent of the environment, there was no pattern to the length of the lizards' hind limbs and apparently no relationship between limb length and perch diameter, he explained.

Over the next few years, however, a pattern did emerge for the lizards on the experimental islands. With each generation, their hind limbs got shorter, making them better suited for their environment. But the founder effect wasn't completely snuffed out: Lizard populations with the longest limbs in 2006 still had the longest limbs three years later.

“Both processes seem to be important here,” Kolbe said. "Original differences were created that were random, and then the environment decreased their mean hind-limb length."

Andrew Hendry, an evolutionary biologist at McGill University in Quebec, who was not involved in the research, was impressed with the study and its findings. "There are very few experimental studies that have looked at these processes in nature," Hendry told LiveScience. "I would have done exactly the same study had I thought of it."

But, Hendry notes, "I'm not sure how much it informs us about real situations." The researchers set up an experiment where they would see the maximum effects of the evolutionary processes, which isn't always the case in real life, he said. Hendry is interested in seeing what would happen if more than two animals were used to create a founding population.

David Reznick, an evolutionary biologist at the University of California, Riverside, was intrigued that all of the experimental populations survived throughout the course of the study (on average, the populations actually grew 13-fold over the first two years, before leveling off). When a population only starts with a few individuals, there is always the risk of inbreeding, which decreases the fitness of the population and their ability to survive and reproduce, he said.

If the lizard populations continue to grow, the study could have implications for conservation biology, which seeks to restore species on the brink of extinction.

"It would mean that a small number of founders is enough, so long as the populations grow well after they've been introduced," Reznick told LiveScience. "Restoring species and their habitats are important issues we are now confronting."

The study was published online today (Feb. 2) in the journal Science.