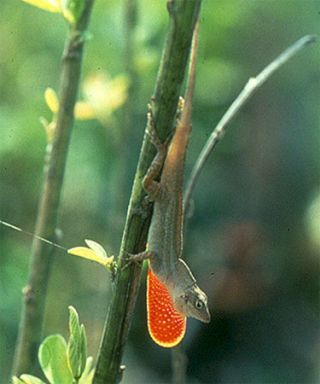 In a reptilian version of "Survivor," lizards with longer legs ultimately get booted from islands by their short-legged opponents.

Countering the widespread view of evolution as an eon-long process, evolutionary biologists discovered that when island lizards were exposed to a new predator, natural selection occurred in a six-month period, first favoring longer and then shorter hind legs.

The findings are detailed in the Nov. 17 issue of the journal Science.

Brown anolis (Anolis sagrei) lizards spend much of their time on the ground. But as previous studies have shown, when a ground-dwelling, predatory lizard is introduced, the anoles scamper up trees. They switch to an arboreal lifestyle to escape being eaten.

Anoles’ long legs make them fast runners, giving them an advantage in a ground-based setting where not much balance is necessary.

Researchers led by Jonathan Losos of Harvard University studied brown anole populations on 12 small islands in the Bahamas. They introduced a larger, predatory lizard (Leiocephalus carinatus) to six of the islands, while keeping six other control islands predator-free.

The scientists counted, marked and measured lizards at the beginning of the study, after six months, and again after 12 months. After six months, the anole populations dropped by half or more on islands with predators. On predator islands, the anole survivors had longer legs than non-survivors, a result the scientists suggest is due to longer-legged lizards being faster runners and better able to elude capture by predators.

Tables turned, however, during the next six months. The surviving anoles became increasingly arboreal, spending much of their time in treetops. At the end of the six-month stint, measurements showed surviving anoles had shorter legs compared with non-survivors. There was no significant difference in leg length between surviving and non-surviving anoles on control islands.

The researchers think that, over a longer period of time, the anoles in the presence of a predator would evolve much shorter limbs.