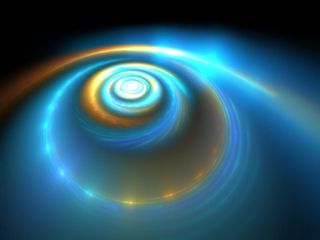 Erik Andrulis of Case Western suggest everything around us oscillates between excited and ground states as objects pivot around the center of these lifelike gyres, or spinning spirals.
(Image: © R.T. Wohlstadter | Shutterstock)

A "theory of everything" from a scientist at Case Western Reserve University got a lot of attention for positing that inanimate objects, from planets and water to strands of DNA, are alive. Not only is the assertion bunk, but the scientific and media phenomena surrounding the study reveals how sometimes crackpot ideas can get traction.

The paper, by CWRU biochemist Erik Andrulis, was published in the journal Life, and says all physical phenomena can be explained by "gyres." Gyres, according to his theory, transform energy, matter and information to create the physical systems we're all familiar with, such as the phase transitions of water and the chemicals life is made of. It also includes a few that aren't familiar, like quantum gravity (a theory which hasn't been invented yet).

Essentially, objects — atoms, cells, molecules, chemicals and so on — are packets of energy and matter that are described by gyres – spinning spirals. Gyres are defined by the singularity at one end and the changing shape of the spiral at the other. Everything around us oscillates between excited and ground statesas they pivot around the center of these lifelike gyres. He doesn't say that everything is alive, exactly, though he says gyres have "lifelike characteristics."

It isn't clear exactly how this works, though, because he never explains it — at least not in a way that is testable. [Twisted Physics: 7 Mind-Blowing Findings]

For example, at one point in the paper, Andrulis says large objects like planets can be described as "macroelectrogyres," and that repulsive and attractive forces in the solar wind cause the planet to make its closest approach to the sun (called "perihelion") and to drift farthest away from the sun (called "aphelion"). That is, expulsion of "macrophotons" repels the "macroelectrogyre" (the planet) into a higher energy state, resulting in a perihelion. The planet dissipates energy and falls into a lower energy state, resulting in aphelion.

Most astronomers and physicists would tell you that perihelion and aphelion are simply the points in an orbit where a planet is closest and farthest from the sun, respectively. The shape of the orbit determines where those points are. Newtonian mechanics does a good enough job of explaining it: As planets accelerate toward the sun they also move perpendicular to the direction of attraction, and trace out elliptical paths. Sometimes (as in calculating the wobbling motion of Mercury's orbit) one has to take relativity into account. But none of that has much to do with the solar wind.

There's also a discussion of the structure of matter. Andrulis writes that electrons are photons that decelerate in steps below the speed of light due to opposing forces – generated by gyres, and it is the reason electrons have spin. Andrulis doesn't mention how one might test this idea, and it doesn't match current physics, which says electrons are elementary particles.

It's also possible that the theory actually says something rather different, but it is hard to decipher from the paper. (Andrulis has not responded to phone calls, nor has he answered questions sent by email, though he has said he would.) Even referring back to the definitions of terms that Andrulis uses in the paper, many of his logical steps don't seem to make much sense.

Or in the words of astrophysicist Ethan Siegel at Lewis and Clark College (and author of the blog Starts With a Bang), "Crackpottery doesn't even begin to describe just how dreadful this is, and how much shame should be heaped upon CWRU for this."

At least a few editors at Life have said they are resigning as a result of Andrulis' paper, while others have been discussing just how this paper got published in the first place. (For its part, Case Western has said it is taking another look at how it decides which papers to issue press releases about.)

There were 23 people on Life's editorial board, plus the editor in chief. At least one member of the board, Ginestra Bianconi, a physicist at Northeastern University, emailed LiveScience to say she tendered her resignation. Marie-Paule Bassez, a professor at the University of Strasbourg in France, said she hadn't seen the paper at all and wasn't interested in being the editor in chief.

Another editorial board member Rainer Glaser, a professor of chemistry at the University of Missouri, said he hadn't read the paper either, though he has seen a flurry of emails between the editorial board members trying to figure out what happened. Part of it, however, was the process of peer review.

In peer review, a scientific paper will be submitted to other scientists in the field. Most of the time the names of the reviewers are confidential (though it often can be figured out – some fields are specialized enough that the number of people who can review it is small).  In a few cases the paper is submitted anonymously, a "double blind" process. The point is to eliminate biases either for or against the researcher.

Sometimes a researcher can suggest reviewers, and that seems to be the case here, Glaser said, adding that these chosen reviewers weren't "hardcore scientists." He wouldn't reveal who they were, though said the review comments went on in some cases for pages, and the reviewers read the paper deeply enough to suggest edits.

So at first blush it doesn't look like another version of the Sokal hoax, in which Alan Sokal, a physicist at New York University, submitted a paper sprinkled with wild and untrue claims (such as one claiming quantum gravity is a social construct) to a journal of cultural studies. But that journal didn't use peer review (though it has since has instituted it).

One scientist who wished to remain anonymous, however, saw the paper and said that it is a probably a hoax, as it seems too obviously nonsense. "And that's too bad because it would hurt a legitimate field," he said.  [5 Science Journal Retractions]

Neither reviewers nor editors are usually paid for the work, as much of the vetting of scientific papers is a volunteer effort.

Life's publisher, Shu-Kun Lin, is an organic chemist who has founded journals in the past (Entropy and Energies, to name two). He too, said he wants to find out where peer-review went wrong. Lin ascribes part of the problem to finding good, qualified reviewers.

Andrulis' previous work is standard and respectable biochemistry research. According to his Facebook page he's a 1992 graduate of the University of Rochester, where he received a Bachelor’s degree in molecular genetics, and he did his doctoral work at SUNY Stony Brook, completing his Ph.D. in 1998.

Andrulis did email to say he would answer questions about the science in the paper, though after three days he hasn't yet done so.