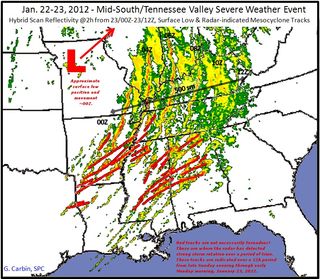 If the numbers hold up, this month could be the third-busiest January since tornado record-keeping began in 1950.

So far this month, weather watchers have filed 70 tornado reports to the nation's Storm Prediction Center in Norman, Okla. When it comes to counting tornadoes, there are a number of caveats, but should the number of confirmed tornadoes approach the number of tornado reports, this month will trail only 2008 (with 88 tornadoes) and 1999 (with 218), as the most tornado-filled Januarys.

January tornadoes are not as common as spring tornadoes, but severe weather can strike any time of year. This year's unusually warm winter has helped fuel January's severe weather in Dixie Alley, said one meteorologist. Tornadoes can form when warm, moist air from the Gulf of Mexico collides with cool, dry Arctic air over the region.

The return of La Niña, a naturally occurring climate phenomenon featuring cooler-than-average Pacific Ocean temperatures that influences global weather patterns,has kept the south warm. The North Atlantic Oscillation — fluctuations in atmospheric pressure at sea level over the North Atlantic Ocean — has also fueled the fires because it is in a positive phase this year. During a positive phase, the South tends to be warmer, Gleason said.

"Those two interactions have been keeping us warmer than average," Gleason told OurAmazingPlanet. "That's been causing all the severe weather that, unfortunately, our state is all too familiar with."

Central Alabama, where tornadoes took a deadly toll in 2011, is braving the twisters again in 2012. Alabama had 10 tornadoes on Jan. 23 and another one yesterday (Jan. 26).

At least two people have died so far this year, both during the big tornado outbreak in Alabama on Jan. 22 and 23. During that outbreak, an EF-2 and an EF-3 tornado caused significant damage and nearly 100 injuries in Jefferson County, near Birmingham.