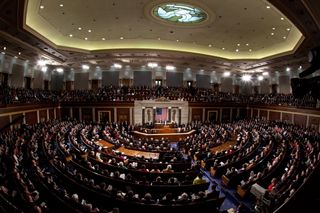 In an election year, it seems safe to say that nobody likes anybody in Washington, D.C. — especially across party lines. But at the State of the Union address tonight (Jan. 24), a large group of Republicans and Democrats will be literally rubbing shoulders in a show of bipartisanship.

In a break with tradition during the 2011 State of the Union address, the Rs and the Ds were deliberately shuffled throughout the crowd in symbolic gesture of solidarity. This year, a "large contingency" of politicians are continuing the new tradition, according to ABC News. Though it's arguable how much these symbolic efforts influence real political behavior, social scientists say getting cozy with a nemesis really can build a bond, but only if the two parties are serious about togetherness.

"Little touches can mean a lot in terms of fostering cooperation," Michael Kraus, a postdoctoral researcher at the University of California, San Francisco, who studies group interactions and nonverbal communication, told LiveScience in 2011. "It could be one of the things that could get people who have been at odds to connect with each other." [Read: Why Can't We All Just Get Along?]

The idea that we feel closer to individuals we're physically closer to is an old one in psychology. It's called propinquity, and it was first noted in studies in the 1930s and 1950s, which found that people who live closer together are more likely to become friends or get married.

This may seem obvious, given that people who live next door are more likely to know each other than people who live three streets apart. But the key is that bumping into one another allows us to see what we have in common, Kraus said.

"You have frequent interactions that allow you to see the similarities between you," Kraus told LiveScience.

People are also more generally influenced by distance, even in their interactions with objects, said Massachusetts Institute of Technology marketing professor Joshua Ackerman. Being closer to an object makes people feel more attached to it.

In a 2008 study published in the journal Judgment and Decision Making, people who handled a coffee mug for 30 seconds were willing to pay more for it than those who handled the same mug for 10 seconds.

"If someone is sitting closer to you, you feel closer to them," Ackerman said. "You feel like you like them and you trust them more."

But propinquity doesn't work in a vacuum. There has to be an initial level of trust, Ackerman said. Otherwise, closeness can backfire.

"If you have negative opinions, whether it's cross-race or cross-party boundaries, bringing people closer to you is a bad thing," Ackerman told LiveScience. "It's not going to solve the problem by itself."

Whether lawmakers have enough trust in one another to work together is an open question. Turning the metaphor of "reaching across the aisle" into a reality will require repetition, Ackerman said.

"If this were happening regularly, then that might actually reinforce that transition from physical behavior to the more metaphorical, abstract action," Ackerman said.

People take metaphors surprisingly literally, studies have shown. People with warm hands behave more generously than people whose hands are cold, perhaps because of the learned association drilled into our heads by phrases like, "He's such a warm person." Likewise, holding a heavy object can make people view a task as more serious than if they were holding a light object.

So if they're repeated enough, symbolic acts of cooperation could help viewers at home see Congress as more united, Kraus said.

"It could start here, where we stop accentuating these group differences between people," Kraus said. Power struggles and party ideology may override the spirit of partnership, he added, but bipartisan seating buddies may still be worthwhile.

"When you think about how sitting apart is going to accentuate these group differences and lack of cooperation between parties, sitting together has got to be a step in the right direction," Kraus said.