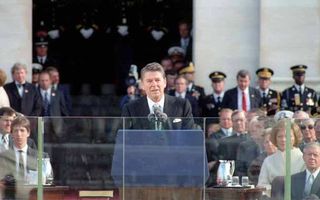 Ronald Reagan delivering his first inaugural address, 1981. " We are not, as some would have us believe, doomed to an inevitable decline," he said, in calling on American determination, courage, and strength to forge an era of national renewal.

When he delivers his historic inaugural address on Jan. 20, President-elect and noted public speaker Barack Obama will be continuing a 220-year-old oratorical tradition begun by George Washington. A set of spoken words hasn' t been so hotly anticipated by so many people since perhaps Obama's victory speech on election night.

Though not required by the Constitution, George Washington gave the first inaugural address as the new president in 1789, and every other incoming commander-in-chief has kept up the practice. Since then, incoming leaders have delivered speeches ranging from the prosaic to the powerful and much in between, reflecting the challenges of the era. Obama’s speech-writer is just 27 years old ... a lot of pressure for someone whose text could either rally a nation or merely be slipped quietly into the archives of history. For insurance, he might take a cue from a few of the better inaugural addresses of the past — the ones we remember, that we quote, that we see pop up on "Jeopardy" from time to time.

We' ve compiled the five inaugural addresses that most historians consider tops: Ronald Reagan: 1981 – Let us renew our faith and our hope

In the first inaugural address given on the West Front of the Capitol building, Ronald Reagan delivered a memorable summons to the American people, asking them for some old-fashioned blood, sweat and tears to combat the economic hardships that had hit the nation: "We are not, as some would have us believe, doomed to an inevitable decline. I do not believe in a fate that will fall on us no matter what we do. I do believe in a fate that will fall on us if we do nothing. So, with all the creative energy at our command, let us begin an era of national renewal. Let us renew our determination, our courage, and our strength. And let us renew our faith and our hope."

Franklin D. Roosevelt: 1933 – The only thing we have to fear is fear itself

With the Great Depression entering its worst years, FDR spoke to the very real concerns of everyday Americans while imploring the people to get back on their feet: "This great Nation will endure as it has endured, will revive and will prosper. So, first of all, let me assert my firm belief that the only thing we have to fear is fear itself — nameless, unreasoning, unjustified terror which paralyzes needed efforts to convert retreat into advance. In every dark hour of our national life a leadership of frankness and vigor has met with that understanding and support of the people themselves which is essential to victory. I am convinced that you will again give that support to leadership in these critical days." Thomas Jefferson: 1801 – We are all Republicans

Thomas Jefferson opened the 19th century with a stirring, eloquent speech aimed at repairing divisions caused by his controversial election, which took recounts and debates in Congress to decide: "We have called by different names brethren of the same principle. We are all Republicans, we are all Federalists. If there be any among us who would wish to dissolve this Union or to change its republican form, let them stand undisturbed as monuments of the safety with which error of opinion may be tolerated where reason is left free to combat it."

Ironically, Jefferson went on to give what is considered one of the worst inaugural addresses after his re-election in 1804.

John F. Kennedy: 1961 – Ask not what your country can do for you Perhaps the most quotable inaugural line of all time comes from the swearing-in of JFK. Speaking during the depths of the Cold War, Kennedy asked his countrymen and women to join in to defend America against the common enemies of man: "I do not believe that any of us would exchange places with any other people or any other generation. The energy, the faith, the devotion which we bring to this endeavor will light our country and all who serve it — and the glow from that fire can truly light the world. And so, my fellow Americans: ask not what your country can do for you — ask what you can do for your country."

With the Civil War in its final days and the country still divided, Abraham Lincoln kept his second inaugural address short but poignant in the hopes of reconciliation:

"With malice toward none, with charity for all, with firmness in the right as God gives us to see the right, let us strive on to finish the work we are in, to bind up the nation's wounds, to care for him who shall have borne the battle and for his widow and his orphan, to do all which may achieve and cherish a just and lasting peace among ourselves and with all nations."