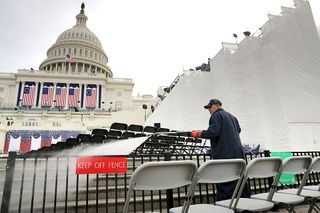 Donald Trump will be sworn in as the 45th president of the United States on Jan. 20, 2017, on the west front of the U.S. Capitol (shown here a day before the inauguration).
(Image: © Chip Somodevilla/Getty Images)

On Friday (Jan. 20), Donald Trump will place his hand on the Bible and swear an oath to serve the United States as its 45th president and preserve the U.S. Constitution to the best of his abilities.

Before his oath, there will be an invocation and prayer reading by His Eminence Timothy Michael Cardinal Dolan, Archbishop of New York; Rev. Dr. Samuel Rodriguez, of the National Hispanic Christian Leadership Conference; and Pastor Paula White, of New Destiny Christian Center, according to an official schedule of events. The benediction and more readings will follow.

Prayers and reverends and bibles? The religious overtones don't end there.

Most presidents end the Oath of Office with, "so help me God," a tradition that many say was started by George Washington, according to Constitution Daily. Even so, neither the phrase "so help me God" nor the use of a Bible is officially required in the presidential oath. Nor is the separation of church and state explicitly spelled out in the Constitution. [The Weirdest Inaugurations in US History]

So how did the inauguration become so entrenched with "God?"

Washington did place his hand on a Bible during his swearing in, though apparently the specific choice of Bible was not surrounded by so much formality and hype. It was, historians say, an afterthought, the Washington Post reported. Trump will be sworn in using two Bibles: one embossed with his name that his mother gave him in 1955 when he graduated elementary school at First Presbyterian Church in Jamaica, New York; the other was the Bible used by Abraham Lincoln.

The Lincoln Bible "is bound in burgundy velvet with a gold-washed white metal rim along the edges of the covers," according to an official statement. The Bible, used during three other inaugurations — 1861, 2009 and 2013 — is part of the Library of Congress collections.

What about the "separation of church and state?" Didn't the First Amendment ensure a dividing wall between the two? (Not really, historians say, though its words have been misinterpreted since the beginning.)

When the Founding Fathers sat down in Philadelphia to draft the U.S. Constitution in 1787, they were preoccupied with establishing the machinery for an effective new government and included very few guarantees of individual rights.

Though some members of the Constitutional Convention brought up the benefit of including some kind of bill of rights, those recommendations were rejected, probably because delegates feared more sticky debate over the already controversial document, historians say.

It wasn't long before those safeguards became important, with some states refusing to ratify the Constitution without the addition of protections for individual rights. Thomas Jefferson called the original omission of a bill of rights a major mistake, according to a letter he wrote to James Madison, pushing the future president to draft the amendments.

The promise of the future inclusion of the Bill of Rights eventually appeased the dissenters and helped get the Constitution ratified by the required number of states in 1789.

Officially added in 1791 along with the rest of the Bill of Rights, the religious portion of the First Amendment to the Constitution became known as the Establishment Clause:

"Congress shall make no law respecting an establishment of religion, or prohibiting the free exercise thereof; or abridging the freedom of speech, or of the press; or the right of the people peaceably to assemble, and to petition the Government for a redress of grievances."

Besides its usefulness in getting the Constitution passed, the original intent of the First Amendment was to ensure that residents of the new United States enjoyed a tolerant society, not necessarily one completely free of religion. [10 Historically Significant Political Protests]

Fresh in the minds of many of the early immigrants to America was persecution at the hands of the governments in their home countries. The First Amendment prohibited the U.S. government from mingling in the religious business or forcing worship on any of its subjects, but did not make an outright proclamation that the affairs of the state should be totally void of any religious connotations.

The famous "separation of church and state" utterance is attributed to Thomas Jefferson, who, though an intensely spiritual man himself, wrote in an 1802 letter to leaders of a minority faith in Connecticut:

"Believing with you that religion is a matter which lies solely between man and his God, that he owes account to none other for his faith or his worship, that the legitimate powers of government reach actions only, and not opinions, I contemplate with sovereign reverence that act of the whole American people which declared that their legislature should 'make no law respecting an establishment of religion, or prohibiting the free exercise thereof,'" he wrote, "thus building a wall of eternal separation between Church and State."

Church and state are decidedly un-separate today, argue several groups of people, including those who protested Obama's inauguration plans in 2009.

The Pledge of Allegiance: "I pledge allegiance to the flag of the United States of America, and to the Republic for which it stands: one Nation under God, indivisible, With Liberty and Justice for all."

"In God We Trust": This phrase is found on all U.S. paper bills and coins. It became the official national motto in 1956 — at the height of anti-atheism and anti-Communist sentiment — and the state motto of Florida in 2006.

The employment of Chaplains in Congress and the military.

Court cases challenging the Establishment Clause are frequent. Many debate the practice of school-sponsored prayer, or the presence of religious displays in public places during the holidays.

In two such cases in the 1980s, one Christmas crèche display was deemed constitutional because it also included secular figures such as a plastic reindeer and thus was considered a general celebration of the season, while the other reindeer-free display was declared in violation of the Establishment Clause.

Editor's Note: This article was first published in 2009 and updated with new information by Jeanna Bryner in 2017.