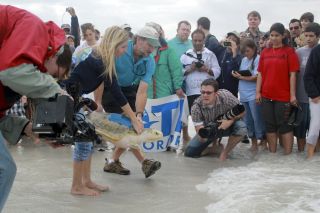 A world-traveling sea turtle found stranded in the Netherlands is back home in the Gulf of Mexico today (Dec. 27) after three long years of rest and rehabilitation.

The animal, an endangered Kemp's ridley sea turtle, was found frigid and near-dead off the coast of the Netherlands in 2008, thousands of miles from the Gulf waters these turtles call home. It was dubbed Johnny Vasco de Gama by its European rescuers.

Marine biologists suspect Johnny became caught in cold currents and was "cold-stunned," a condition that shuts down internal organs and can kill sea turtles. Staff members of the Rotterdam Zoo stabilized the ailing turtle and sent him to the Oceanário de Lisboa aquarium in Portugal the following summer.

After rehabilitation there, Johnny flew in a specially adapted plane back across the Atlantic to Mote Marine Laboratory in Florida. Today scientists there released the well-traveled turtle back into the sea.

Johnny is fitted with a satellite tag that will help researchers keep an eye on his next amazing journey. Mote has tracked more than 120 sea turtles since 2005, according to Tony Tucker, the head of the laboratory's Sea Turtle Conservation and Research Program.

"By tracking Johnny, we'll obtain a rare look at how rehabbed turtles reorient in the wild," Tucker said in a statement. "Fortunately, we can compare this turtle to other wild Kemp's ridleys being tracked currently by Mote and other institutions around the Gulf."

Those interested in following Johnny can visit seaturtle.org/tracking to keep up with him as well as a handful of other roaming sea turtles.