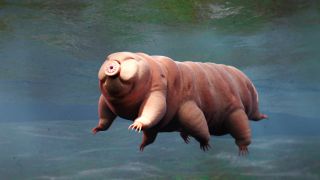 Can these little beasties make it to old age?
(Image: © Shutterstock)

Tardigrades are probably the most paradoxical animals on the planet. On the one hand, these microscopic organisms are impossibly cute, seeming like tiny blimps that bumble around harmlessly on their stubby legs. But they also enjoy a legendary reputation as the toughest, most indestructible creatures on Earth.

Just 0.04 inches (1 millimeter) long (or less), their little bodies contain biological superpowers that help them withstand conditions that would spell certain death for other organisms. Taking their toughness into account, how long can these creatures live?

That depends on where they're found. Tardigrades occur almost everywhere on the planet, but most are happiest frolicking about in moist habitats, such as the moss that adorns river stones. When tardigrades have enough food and water to support their bodily functions, they live out the natural course of their lives, rarely lasting for longer than 2.5 years, according to Animal Diversity Web, a database run by the University of Michigan. [How Did Life Arise on Earth?]

And yet, tardigrades can survive for much longer if they go into a state called cryptobiosis, which is triggered when environmental conditions become unbearable.

"Tardigrades are fascinating little beasties," said Sandra McInnes, a tardigrade researcher with the British Antarctic Survey, who has been studying species that occur in the frozen snowscapes of Antarctica since 1980. "Tardigrades have this ability to cope with extreme environments by shutting down their metabolism. This ability to cope with drying out or freezing is what gives them their durability in the Antarctic."

Cryptobiosis puts tardigrades into a "tun" state, slowing their metabolism to a halt, reducing their need for oxygen and ridding their cells of water almost completely, according to the Encyclopedia Britannica. In this shrunken state, tardigrades mimic death so closely that they're able to survive in places devoid of water, at temperatures as low as minus 328 degrees Fahrenheit and as high as 304 degrees F (minus 200 Celsius and 151 degrees C). When these mummy-like tardigrades are exposed to water again, they simply reanimate, returning to normal life in a matter of hours.

"So long as the tardigrade can get into the tun, it will cope with anything that you throw at it," McInnes told Live Science.

McInnes once defrosted a moss sample from a former experiment and found it contained live tardigrades. She deduced that the organisms had survived, frozen, for at least eight years. In 2016, a paper published in the journal Cryobiology made waves when it showed that a handful of tardigrades, frozen in another Antarctic moss sample back in 1983, had survived in this frigid state for 30 years until they were revived in 2014. It's thought that the tardigrade's talent for self-preservation comes down, in part, to its production of unique proteins that can lock fragile cell components into position. That protects the membranes, proteins and DNA from being shattered, pierced and torn when cells become desiccated, according to a 2017 study in the journal Molecular Cell.

But the range of risky scenarios that tardigrades can survive has left scientists puzzled by just how these little beasties pull it off. "We are literally just scratching the surface of the biochemistry, the molecular pathways by which these animals cope with these environments," McInnes said. For instance, along with being frozen, boiled and dried, it's known that tardigrades can withstand pressures of up to 87,000 pounds per square inch (600 megapascals) — six times what you'd experience at the bottom of the sea. Just half this pressure would kill most other organisms on Earth. [What's the Oldest Living Organism?]

Many researchers have gone to extreme lengths to test tardigrade resilience, by blasting them (in their tun state) into space. In many of these studies, the space-traveling tardigrades were exposed to direct solar radiation and gamma-rays. But when they were popped into a water-filled petri dish back on Earth, they "basically walked away and said, 'OK, where's dinner?'" McInnes said. Tardigrades are seemingly able to resist radiation and even repair their DNA, which may explain why they're so resilient to radiation's extreme effects, a 2013 PLOS ONE study reported.

"If they've got this ability to last over time, how long do they live? Well, how long is a piece of string?" McInnes said. But she cautioned against the prevailing belief that tardigrades are invincible: "They can't live forever," she said. The widely publicized notion that tardigrades can survive in a tun state for 100 years or more is an overstatement, for instance. And high-stress living does take its toll on their physiology. Only some tardigrades survive the torments of experimental freezing, boiling and radiation that we humans subject them to.

But there is another way to appreciate their resilience: on a species level. Not only have tardigrades existed since the Cambrian period 541 million years ago, but they may well go on to outlive us — and probably all other life on Earth, according to a 2017 paper published in the journal Scientific Reports. It found that if a cataclysmic event like an asteroid impact were to befall Earth and destroy life, a group of tardigrades inhabiting the ocean's Mariana Trench would endure.

As well as being impossibly cute, it would therefore seem that tardigrades are our surest hope for maintaining life on this planet.