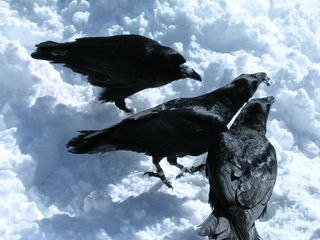 The researchers found that ravens often use their beaks like hands to make gestures, such as this male raven is doing as the bird shows two of its kin an object in its beak.
(Image: © Thomas Bugnyar)

Ravens use their beaks and wings much like humans rely on our hands to make gestures, such as for pointing to an object, scientists now find.

This is the first time researchers have seen gestures used in this way in the wild by animals other than primates.

From the age of 9 to 12 months, human infants often use gestures to direct the attention of adults to objects, or to hold up items so that others can take them. These gestures, produced before children speak their first words, are seen as milestones in the development of human speech.

Dogs and other animals are known to point out items using gestures, but humans trained these animals, and scientists had suggested the natural development of these gestures was normally confined only to primates, said researcher Simone Pika, a biologist at the Max Planck Institute for Ornithology in Seewiesen, Germany. Even then, comparable gestures are rarely seen in the wild in our closest living relatives, the great apes — for instance, chimpanzees in the Kibale National Park in Uganda employ so-called directed scratches to indicate distinct spots on their bodies they want groomed.

Still, ravens and their relatives such as crows and magpies have been found to be remarkably intelligent over the years, surpassing most other birds in terms of smarts and even rivaling great apes on some tests.

"[What] I noticed when I encountered ravens for the first time is that they are, contrary to my main focus of research, chimpanzees, a very object-oriented species," Pika said. "It reminded me of my childhood, when my twin brother and I were still little and one of us suddenly regained a favorite toy, which existence both of us had forgotten for a little while. This toy suddenly became the center of interest, fun and competition. Similar things happen, when ravens play with each other and regain objects."

To see if ravens communicated using gestures, scientists investigated wild ravens in Cumberland Wildpark in Grünau, Austria. Each bird was individually tagged to help identify them.

The researchers saw the ravens use their beaks much like hands to show and offer items such as moss, stones and twigs. These gestures were mostly aimed at members of the opposite sex and often led those gestured at to look at the objects. The ravens then interacted with each other — for example, by touching or clasping their bills together, or by manipulating the item together. As such, these gestures might be used to gauge the interest of a potential partner or strengthen an already existing bond.

"Most exciting is how a species, which does not represent the prototype of a 'gesturer' because it has wings instead of hands, a strong beak and can fly, makes use of very sophisticated nonvocal signals," Pika told LiveScience.

Ravens are known to possess a relatively high degree of cooperation between partners. These findings suggest that gestures evolved in a species that demonstrates a high degree of collaborative abilities, a discovery that might shed light on the origin of gestures within humans.

"Gesture studies have too long focused on communicative skills of primates only," Pika said. "The mystery of the origins of human language, however, can only be solved if we look at the bigger picture and also consider the complexity of the communication systems of other animal groups."

As to whether or not these findings suggest that ravens are smarter than dogs, "I am not an advocate of proposing that a given species is smarter than another one," Pika said. "In my view, all species have adapted to distinct social and ecological settings and niches, and thus, a given species might behave in a distinct situation 'smarter' than another one in the same situation and vice versa. In my opinion, it is much more interesting to investigate why one species can solve a given task better than another one and how and why this behavior evolved."

Pika and her colleagues would like to further explore what other gestures ravens use and what their meaning and function might be. Pika and Thomas Bugnyar detailed their findings online Nov. 29 in the journal Nature Communications.