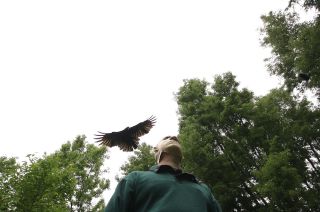 This crow doesn't forget a face. The mask, worn before while researchers were trapping and banding the birds, spurs the bird to dive-bomb and scold its wearer.
(Image: © John Marzluff)

The common crow knows when you're out to get him — and he's likely to teach his friends and family to watch out for you, a new study finds.

In results that can only be described as Hitchcockian, researchers in Seattle who trapped and banded crows for five years found that those birds don't forget a face. Even after going for a year without seeing the threatening human, the crows would scold the person on sight, cackling, swooping and dive-bombing in mobs of 30 or more.

"Most of the birds that are scolding us are not the ones we captured," said study researcher John Marzluff, a professor of wildlife science at the University of Washington and an occasional victim of crow attacks. "It's likely that they're learning from their parents and their peers that this dangerous person is still out there."

Crows are savvy birds: They not only use tools, but can use common sense to come up with ways to make unfamiliar tools work. They also hold a grudge. A study published in May in the journal Animal Cognition found that crows' close relatives, magpies, recognize researcher's faces regardless of what the scientists wear. And just this month, police in Everett, Wash., about 25 miles north of Seattle, found themselves on the wrong side of a flock (or "murder") of crows. The birds dive-bombed the officers as they walked across their station's parking lot. State Department of Fish and Wildlife officials blamed fledgling season, when adult birds become extremely protective of the young that are just leaving the nest. ("Umbrellas may be used as a defense tactic" against the crows, reported the Everett Herald newspaper.)

Marzluff and his colleagues similarly noticed that when they trapped and banded crows for research, mobs of angry birds would fly overhead, scolding them. When the researchers returned to the area later, the birds immediately recognized them and started scolding.

"The more we messed with them, the more we thought they were really paying attention to us," Marzluff told LiveScience.

The researchers launched a five-year study to find out how much data their research subjects had been gathering on them. To ensure that crows were responding to their faces and not to their clothes, binoculars or some other ornithologist cue, the scientists wore different masks while trapping birds at each site. The masks included a caveman, Dick Cheney and several custom-made realistic faces.

The birds quickly learned that the masked bird-trapper was bad news and proceeded to scold the mask-wearer anytime they saw him or her. But over the years, the researchers found, the mobbing became more and more widespread. In February, Marzluff said, he ventured out of his office in a mask he'd worn five years earlier while trapping seven birds.

It was clear the birds that had never seen the trapping were joining the angry murders. The question, Marzluff said, was whether those birds were simply following the lead of a single bird that had seen the trapping, or had learned from their flockmates that this was a face to watch out for.

"A lot of laboratory studies will show that [crows] can learn by observation, but not in the field," Marzluff said. "That combination of learning firsthand and learning through these observations, that's what's unique about our study."

The researchers reported their results June 28 in the journal Proceedings of the Royal Society B. They are now using brain-scanning techniques on captured birds to find out what's happening in the crows' brains when they see a dangerous face.