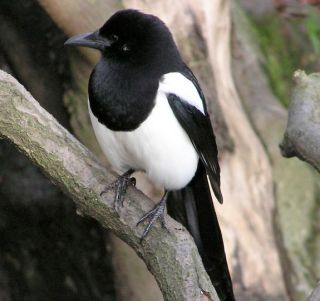 This European magpie may be able to recognize people by their faces. Watch out, he may try to dive-bomb you!
(Image: © Wikimedia Commons user Arpingstone)

A researcher in South Korea going about his job collecting data on local magpie populations made a stunning discovery: The birds recognized his face, and began to dive-bomb him out of their nests, like a scene from Alfred Hitchcock's "The Birds."

"I remember when a magpie came down from a nest tree scolding at me," study researcher Won Young Lee, a student at Seoul National University, said in a statement. "I was with a second researcher at that time, and I tried to fool the magpie by giving my cap to the other person. But this did not work! When I moved away the bird followed me rather than the fellow observer wearing my cap."

At the time of the attack Lee was taking inventory of the birds around the university campus — counting the number of birds and eggs in each nest. He had already visited some of the nests to install cameras for a separate project, and he noticed that only the birds from nests he had previously visited were aggressive specifically toward him.

Lee and his lab mates did a preliminary study of how the birds were able to recognize him. Two new students dressed up in the same clothing and entered the magpies' territory. One of them climbed the tree while the other stood on the ground. All of the magpies attacked only the climbers.

It's not all that surprising that the magpies can recognize researchers; they are one of the few animals (including humans, other great apes, dolphins, elephants and even bees) that can actually recognize themselves in the mirror. They are also closely related to ravens, which have been noted to recognize and attack researchers invading their nests.

The birds that live on the campus are constantly exposed to humans, so learning to recognize those who threaten their nests could be a natural reaction. Even household pets seem to recognize their owners. Because of this, Lee and other researchers need to keep their eyes to the skies when performing their surveys.

Co-researcher Piotr Jablonski, also at Seoul National University, said in a statement: "It is amazing that magpies can recognize one individual human out of twenty thousand people present in the campus." As a foreigner living in Korea, he confessed that he has had difficulties telling people apart, especially during the first year or two.

"All Asians looked similar to me," he said, "but probably not to the magpies."

The study will be published in a forthcoming issue of the journal Animal Cognition. Check out the video below to see some magpie dive-bombing non-researchers!