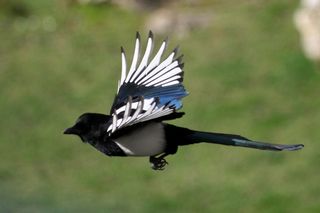 For birds, size matters in one key organ.  Those with bigger noggins outsmart and outlive their small-brained relatives.

This could help them adapt to global warming and shrinking habitats, researchers say.

After a study that compared brain and body sizes with mortality rates for 220 bird species in polar, temperate and tropical regions, the researchers say they are the first to show that larger brains, relative to body size, help birds dodge  death.

Compared with other organs, the brain requires extra energy to develop and maintain. Therefore, researchers have theorized that a bigger brain makes up for its high metabolic price tag by giving animals the mental agility to survive environmental challenges. This idea is known as the “cognitive buffer” hypothesis.

"We have shown that species with larger brains relative to their body size experience lower mortality than species with smaller brains, supporting the general importance of the cognitive buffer hypothesis in the evolution of large brains," said Tamas Szekely of the University of Bath, co-author of the study published in the journal Proceedings of the Royal Society B: Biological Sciences.

The findings might explain such phenomena as why small-headed pheasants are more likely to become road kill, while magpies have an easier time avoiding a moving vehicle.

Birds are ideally suited for such research, as they are one of the few groups of animals for which the relationship between large brains and enhanced behavioral response to ecological challenges is best understood, Szekely said.

Through innovation and learning, enhanced cognitive skills allow animals to avoid predators and make better real estate and mating choices—all of which could reduce the risk of fatality. Such smarts could also help big-headed birds elude the threats of environmental changes.

"Our findings suggest that large-brained animals might be better prepared to cope with environmental challenges such as climate change and habitat destruction," Szekely said. "This is supported by other research which has shown that large-brained birds are more successful in colonizing new regions and are better at surviving the changing seasons."

For more than a century, researchers have been debating whether brain size is related to intelligence in humans. The jury is still out on whether the body proportions of a Pez dispenser would be beneficial.