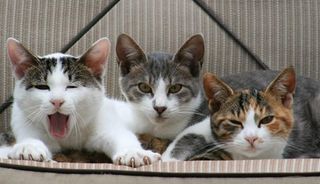 Some cats may manipulate their owners into feeding them with a unique meow - a purr mixed with a high-pitched cry.
(Image: © stock.xchng)

If you've ever wondered who's in control, you or your cat, a new study points to the obvious. It's your cat.

Household cats exercise this control with a certain type of urgent-sounding, high-pitched meow, according to the findings.

This meow is actually a purr mixed with a high-pitched cry. While people usually think of cat purring as a sign of happiness, some cats make this purr-cry sound when they want to be fed. The study showed that humans find these mixed calls annoying and difficult to ignore.

"The embedding of a cry within a call that we normally associate with contentment is quite a subtle means of eliciting a response," said Karen McComb of the University of Sussex. "Solicitation purring is probably more acceptable to humans than overt meowing, which is likely to get cats ejected from the bedroom." [In Photos: America's Favorite Pets]

McComb suggests that the purr-cry may subtly take advantage of humans' sensitivity to cries they associate with nurturing offspring. Also, including the cry within the purr could make the sound "less harmonic and thus more difficult to habituate to," she said.

McComb got the idea for the study from her experience with her own cat, who would consistently wake her up in the mornings with a very insistent purr. After speaking with other cat owners, she learned that some of their cats also made the same type of call. As a scientist who studies vocal communication in mammals, she decided to investigate the manipulative meow.

Setting up the experiments wasn't easy. While the felines used purr-cries around their familiar owners, they were not eager to make the same cries in front of strangers. So McComb and her team trained cat owners to record their pets' cries — capturing the sounds made by cats when they were seeking food and when they were not. In all, the team collected recordings from 10 different cats.

The researchers then played the cries back for 50 human participants, not all of whom owned cats. They found that humans, even if they had never had a cat themselves, judged the purrs recorded while cats were actively seeking food — the purrs with an embedded, high-pitched cry — as more urgent and less pleasant than those made in other contexts.

When the team re-synthesised the recorded purrs to remove the embedded cry, leaving all else unchanged, the human subjects' urgency ratings for those calls decreased significantly.

McComb said she thinks this cry occurs at a low level in cats' normal purring, "but we think that cats learn to dramatically exaggerate it when it proves effective in generating a response from humans." In fact, not all cats use this form of purring at all, she said, noting that it seems to most often develop in cats that have a one-on-one relationship with their owners rather than those living in large households, where their purrs might be overlooked.

The results were published in the July 14 issue of the journal Current Biology.