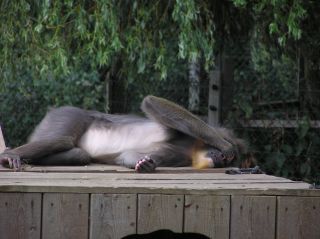 A male mandrill at the Colchester zoo in England performs a unique gesture with his right hand, which one scientist believes acts as a 'do not disturb sign.'
(Image: © Mark Laidre)

Zookeepers at a British zoo had noticed some of the monkeys living within a group of mandrills sometimes made a peculiar gesture: They covered their eyes with one hand. At first glance, this gesture doesn't make sense. Often, there isn't any sun to block, and the monkeys keep their eyes open during gesture.

But researcher Mark Laidre has a theory: A hand over the eyes indicates a sort of "do not disturb" sign used by low-ranking monkeys to keep others at bay. And because it does not seem to occur among other mandrills — both captive and wild — Laidre, who is a research fellow at the University of California, Berkeley, believes the sign may be evidence of social culture among animals.

1n 1999, zookeepers saw a juvenile female mandrill, Milly, make the gesture for the first time. But no one realized its significance for years until Laidre visited in 2007. At that point, he had been observing mandrills in Africa, Europe and North America for more than five years.

"I saw this behavior in the first few hours," he said. "I'd never seen this before; I knew it was very interesting."

From a scientific perspective, culture is a behavior learned from others that varies by population. Once thought to be unique to humans, it has been observed among animals (such as monkeys known as Japanese macaques, whose practice of washing sandy food in water started with a single young female, or dolphins using sponges as foraging tools).

In many cases, examples of learned behavior such as this are grounded in the physical environment – for instance, natural sponges make handy tools for dolphins seeking to protect their rostrums, or beaks, as they probe for prey.

There is also evidence that animals, like humans, can develop gestures that have a purely social meaning – flipping the bird would be a well-known example for North American humans. Among animals, nearly all culturally based gestures identified so far have been restricted to apes, Laidre wrote in a study published Feb. 2 in the journal PLoS ONE. Laidre was a graduate student at Princeton University when he conducted this research.

He emphasizes that there has been no cultural crossover among the monkeys he studied.

"Mandrills have never once, in the lifetime of this gesture, been observed using this in a way that is directed toward humans," he said. "It is done irrespective of humans."

Laidre spent 100 hours in 2007 and 2008 observing the group of up to 23 mandrills. At this point, the gesture was already well-established among some members of the group.

He noticed that the mandrills, which are largest of all monkeys and native to the rain forests of equatorial West Africa, were always stationary when they made the gesture. About two-thirds of the time, they performed it while not in direct sunlight, and they peeked through their fingers. He also found that while the animals were covering their eyes, a gesture that could last anywhere from 6 seconds to 17 minutes, the rate at which others approached or touched them dropped dramatically.

Not all of the mandrills in the group used the gesture — in fact, all seven of the gesturers, including the only female Milly, were at the low end of the social hierarchy. Eye-covering appeared to ward off all sorts of social interaction, but in his study Laidre noted that it may allow lower-ranking monkeys to avoid attacks and persecution from higher-ranking individuals.

"By covering their eyes with their hands, individuals possibly conveyed to others that they wanted to be left alone, and this message may have been respected as [a] 'do not disturb' sign," he wrote.

Laidre and other researchers have not seen the gesture used in 18 other captive groups or in the wild.

Like young human children, monkeys do not appear to have a theory of mind – meaning they don't understand that others have perspectives different from their own. So, it's possible that by covering their eyes, the monkeys believed they were hidden. If others touched them, they would react negatively and so an association could have built up between the gesture and a negative reaction to being approached or touched, Laidre theorizes.

It is also possible that captivity played a role. In the wild, mandrills live in much larger groups, and the males leave for half of the year. This dispersal may allow the younger males to escape the wrath of higher-ranking males, but in captivity it can't happen, Laidre said.

"They are in an enclosed environment, they have to basically deal with each other," he said, noting that while mandrills have a strict social hierarchy, higher-ranking individuals are less despotic than among other monkeys.

The creation and spread of the gesture most likely had a chance element to it, "Just like in human culture," Laidre said.