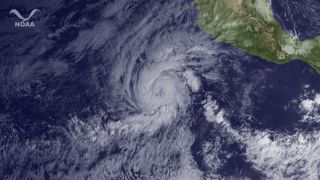 Hurricane Kenneth, as seen in this GOES West satellite images taken today (Nov. 21), becomes the fourth tropical system on record to form in the eastern Pacific Ocean after November 18, and the second-latest hurricane after Hurricane Winnie on December 5, 1983.
(Image: © NOAA)

Just one day after first reaching hurricane status, Hurricane Kenneth has strengthened into a Category 4 storm. The rare mid-November hurricane is now the latest occurring major hurricane ever observed in the eastern North Pacific basin.

Kenneth has punishing winds of 145 mph (230 kph), but is currently not considered a threat to land as it pushes westward some 750 miles (1,210 kilometers) south-southwest of the southern tip of Baja California, according to the National Hurricane Center.

Category 4 is the second-highest category on the Saffir-Simpson scale of hurricane strength. The storm is expected to remain a hurricane through Thursday before weakening.

Though the official hurricane seasons for both the eastern Pacific and Atlantic last until Nov. 30, it is rare for storms to form this late in the year, as tropical ocean waters are cooler than they are at the height of the season in August and September and therefore less likely to fuel the storms.

Kenneth is only the fourth tropical system on record to form in the eastern Pacific Ocean after Nov. 18, and the second-latest hurricane after Hurricane Winnie on Dec. 5, 1983.

The latest a hurricane has ever been observed in the Atlantic basin was the second Hurricane Alice of the 1954 season, spotted on Dec. 31, according to the NHC. The latest hurricane to hit the United States was a storm that made landfall near Tampa, Fla., on Nov. 30, 1925 (this occurred before storms received names).

The low pressure system in the Atlantic that forecasters were eyeing in case it became Tropical Storm Tammy is now not expected to coalesce into a storm.

This story was provided by OurAmazingPlanet, a sister site to Live Science.