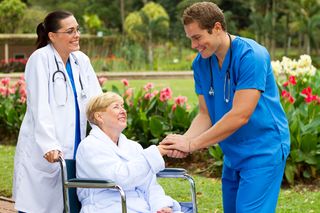 Despite the old stereotype that nursing is a "women's profession," male nurses display more typically masculine traits than men who work in other vocations, a new study suggests.

"The nursing profession is attracting males who hold a high degree of masculinity," the researchers wrote in the November issue of the American Journal of Men's Health. "Efforts should be made to counteract the prevailing belief that male nurses are effeminate."

The idea that male nurses are more effeminate has existed for generations, and is re-enforced by popular culture, according to the study. The stereotype may discourage men from entering the profession, and cause anxiety and tension among those who choose to pursue it.

"This is unfortunate, since evidence suggests that the optimal effectiveness of health care requires both genders in equal numbers," the researchers from East Tennessee State University wrote.

Previous studies on the masculine and feminine attributes of nurses have had inconsistent results. In the new study, the researchers surveyed 109 current nursing students (81 females and 21 males) from 37 states. In surveying students, the researchers aimed to make sure that any differences between the study participants were not due to prolonged work as a nurse.

The average masculinity score for male nursing students was 5.3 (out of 7), compared to 4.9 for male students in other majors.

However, male nursing students also rated themselves as higher in feminine traits —scoring 5.5, on average, while than those in other majors rated as 5.2.

People with high scores in both masculine and feminine categories are classified as androgynous, according to the study.

The findings indicate male nurses are flexible in expressing both stereotypically male and female characteristics.

Because the study was small, and participants' demographic information did not exactly match those of nursing students nationwide, the results may not apply to all nursing students, the researchers said.

Pass it on: Male nurses display more masculine traits than men in other professions.