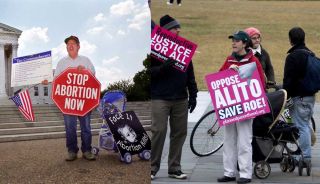 The failure of Mississippi voters to pass a law declaring fertilized eggs full persons has been heralded as both a victory for abortion rights and an inspiration for anti-abortion activists to fight harder. No one seems to think the failure of Proposition 26 will dampen the abortion-rights debate.

In fact, it likely won't. Political scientists say that Americans' attitudes toward abortion have remained remarkably stable in the decades since the 1973 Supreme Court decision in Roe v. Wade. And while these attitudes embrace gray areas far more than the political rhetoric around abortion, political scientists don't expect an end of the debate.

"As long as there are really vocal minorities that regard [abortion] as the most important issue in our lifetime, and some of them do, there will be attempts to get it on the agenda," said Morris Fiorina, a political scientist and senior fellow of the Hoover Institution at Stanford University.

A quick glance at polls about abortion seems to suggest a country stalemated. In 2009, the Pew Research Center found that 45 percent of Americans said that abortion should be illegal in most or all cases, compared with 47 percent who believe it should be legal in most or all cases. But that "most or all" phrasing covers a lot of ground. And, Fiorina said, Americans tend to say abortion is immoral while still supporting Roe v. Wade.

"This is the sort of thing that drives social conservatives crazy, that people can say on the one hand, 'It wouldn’t be right for me,' but on the other hand, 'I don't want to elevate that into law,'" Fiorina said. "Most Americans are troubled. They think there are too many abortions, but they don't want to make it illegal."

In fact, attitudes about abortion have been "remarkably stable" since the 1970s, said Ted G. Jelen, a professor of political science at the University of Nevada, Las Vegas.

According to the survey organization American National Election Studies (ANES), 15 percent of Americans in 2008 said abortions should never be permitted, only a slight creep up from the 11 percent who said the same in 1972, before Roe v. Wade. Other categories are tougher to compare because the phrasing of the survey questions changed over the years. But between 1972 and 1980, when the survey questions remained the same, the numbers barely budged: Between 43 percent and 46 percent of people said abortion should be allowed in the case of danger to the mother's life or health; between 16 percent and 18 percent said abortion should be allowed if a woman would have "personal difficulty" having a child; and between 24 percent and 27 percent said abortion should always be permitted.

Likewise, the numbers stood firm between 1980 and 2008, when a second set of survey questions were asked. Support for abortion's legality in cases of rape, incest, or danger to the mother's life or health wavered between 27 percent and 33 percent. Support for legal abortion in a case of "clear need" beyond rape, incest or health varied from as low as 14 percent in the mid-1990s to 18 percent or 19 percent in the 1980s and 2000s. And legal abortion "always as a personal choice" captured between 35 percent and 40 percent of the support.

The stability of abortion attitudes is surprising, Jelen told LiveScience, because certain personal characteristics associated with a pro-choice viewpoint are on the rise, but pro-choice attitudes are not.  Among those characteristics are more women working outside the home, Jelen said, as well as fewer Americans with religious affiliations.

"You have a number of people you would expect to be more permissive toward legal abortion who don't seem to be," Jelen said.

The driving force behind the stubborn numbers may be the rhetoric of both sides of the abortion debate, Jelen said.

"Both sides of the abortion debate seem to be able to cast themselves in terms of rights," Jelen said. "Americans like rights."

Anti-abortion activists talk about the right of the fetus to life, he said, while abortion rights activists focus on the right of women to make autonomous reproductive choices. That makes the abortion debate very different from another cultural touchstone, the gay rights debate, wherein supporters of gay marriage talk about the right to marry, but the opposition has not made similar rights-based arguments, Jelen said.

Meanwhile, Jelen said, anti-abortion activists have sharpened their message, perhaps winning over non-religious people and others who wouldn't normally oppose abortion. The "partial-birth" abortion debates of the 1990s, for example, focused on a rare procedure, banned in 2003, called intact dilation and extraction in which a fetus is partially removed from the uterus and its skull collapsed to complete the abortion. A small downtick in abortion support during the 1990s may be because of the partial-birth abortion debate, Fiorina said.

Finally, Jelen said, abortion has become a magnet for political polarization, meaning that strict abortion rights proponents and strict opponents are the ones who make it to office.

"You're never going to see any of the Republican candidates for president taking a pro-choice position, even if they don't like the government doing other things," Jelen said.

The future of the abortion debate

Both Fiorina and Jelen agree that the abortion issue isn't going anywhere, Proposition 26's failure in Mississippi notwithstanding. Personhood USA, the group behind the proposed amendment, is pushing to try similar propositions in other states, including Florida and Ohio.

Polls suggest that Americans, while conflicted over abortion, "don't want to make a big move in either direction," Fiorina said. Some demographic changes, including more women who have grown up in an entirely post-Roe era, could mean the issue recedes in importance over another generation, but it's unlikely that there will be an America without an abortion debate anytime soon, he said.

As long as intense pro-life areas such as South Carolina and Iowa are important to presidential primaries, the politicalization of abortion is here to stay, Jelen agreed. America's religiosity and American's stalemate on the rights of the fetus versus the rights of the mother make us different from other countries that have managed to put the abortion issue to bed, he said.

"People are certainly going to keep trying," Jelen said. "There is an activist wing that truly does equate abortion with mass murder and genocide. They're not very numerous, but they're pretty active, and that's not going to go away."