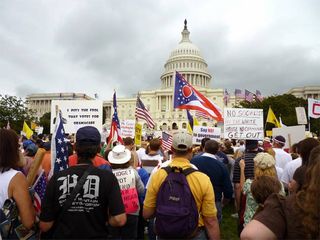 Photo of protesters at the Capitol in Washington, DC on 9/12/09. The Tea Party gathering was in protest of Obama's healthcare plan and government spending.
(Image: © Dreamstime.)

In an election season marked by angry protests and mud-slinging campaigns, it's easy to believe that Americans are more politically polarized than ever. Seven months after the health care reform bill passed, debates over the legislation rage on. The Tea Party is out in full force. The political climate has gotten so ugly that Jon Stewart, the comedian host of Comedy Central's "The Daily Show," held an at least semi-sincere "Rally to Restore Sanity" in Washington, D.C., over the weekend.

But is there really any sanity, or at least any moderate views, left in American politics? According to political scientists and psychologists, the answer is yes. You're just not likely to see it on television -- or in Congress.

The question of whether America is really more divided than ever can seem absurd, considering that this is a country that once fought a civil war. But in terms of political cooperation, politicians are as far apart as any time since the Reconstruction era, said Nolan McCarty, a professor of politics and public affairs at Princeton University in New Jersey and the author of "Polarized America: The Dance of Ideology and Unequal Riches" (2006, MIT Press).

Polarization in Congress is "about as high as we've seen, ever," McCarty told LiveScience.

Congressional votes are much more likely to fall along party lines now than they were in the mid-20th century. A major reason, McCarty said, is that conservative Democrats have shuffled themselves into the Republican Party, while liberal Republicans are now more likely to identify as Democrats. In other words, the politicians within parties now march in lockstep with one another.

"It's all sorted out now in terms of the issues," McCarty said. "Voters who are pro-life, anti-tax, anti-regulatory are almost all in the Republican Party. All of their counterparts who are pro-choice, pro-redistribution, pro-federal government are in the Democratic party."

A graph of polarization from 1879 to 2009 looks like a U-shape, with the greatest cooperation occurring between about 1930 and 1960. The crisis of the Great Depression, the success of the New Deal and the unifying threat of World War II probably all contributed to bipartisanship during those decades, McCarty said.

Immigration and income inequality also influence polarization, McCarty said. The Republican Party draws voters from middle- to upper-income populations, he said, while the Democrats rely on middle- to lower-class voters. During  time periods when the rich are richer and the poor are poorer, each group is more likely to vote based on their interests: Republicans become more anti-tax, while Democrats favor more redistribution programs.

Lately, Republicans have benefited from this effect, McCarty said, because a larger proportion of the poor are immigrants, whether legal or illegal. They can't vote, so wealthier constituencies have relatively more political clout.

Each election exacerbates Congressional polarization, said Keith Poole, a political scientist at the University of Georgia who co-authored "Polarized America" with McCarty.

"We're caught in this extremely dangerous feedback loop where every succeeding generation, especially on the losing side, is cleansed of remaining moderates," Poole told LiveScience. "The overall effect is [the parties] keep marching further and further apart."

While everyone agrees that politicians are divided, the polarization of the public is more controversial.

If you look at the American public as a whole, there is a "vast middle" of unengaged, less-informed people who aren't very polarized, McCarty said.

On the other hand, "those who are much more active and informed have increasingly taken polarized views along with the parties that they support," he said.

"If you look at public opinion data on issues and ideology, the American electorate today looks about the same as it did in the 1970s," Fiorina said.

Voters also show more flexibility than their elected officials, he said. For example, data from a 2008 American National Election Studies survey on attitudes about abortion found that 26 percent of Republicans feel abortion should always be a personal choice, regardless of the official anti-abortion party platform. Likewise, 34 percent of Democrats feel that abortion should be outlawed entirely or allowed only in cases of rape, incest, or threat to the mother's life.

But other researchers, including Poole, argue that while many Americans are apathetic and uninformed about issues, the ones who vote are the ones who make the difference.

"The evidence is pretty clear that since the 1990s at least the informed public has been getting more polarized," Poole said.

Jonathan Haidt, a psychologist at the University of Virginia who studies political and moral decision-making, agrees.

"Until three or four years ago it was possible to claim that the populace was not more polarized, it's only the elites," Haidt told LiveScience. However, he said, "in the last three years, the lines for popular opinion really have diverged. There are now fewer centrists and more conservatives than three years ago."

Researchers agree that the public's political views are less polarized than those of elected officials. Still, the gaps between liberals and conservatives can run deep. That's because political ideology is rooted in morality, Haidt said, and conservatives and liberals have very different understandings of what "moral" is.

Across cultures, there seem to be five foundations of morality, Haidt said. Liberals care about the first two, harm and fairness. Conservatives care about harm and fairness too, but they also worry about the other three foundations: in-group loyalty, respect for authority and purity or sanctity, which ties into religious views. (Haidt's study website, yourmorals.org, allows you to test where you fall on the spectrum.)

People's moral foundations are partially influenced by heritable traits, like a tendency toward disgust (which has been associated with conservatism) or empathy (reflected in the "liberal bleeding heart" stereotype). A study published this month in the Journal of Politics finds that a gene related to a love for novelty may be associated with a liberal outlook. People with the gene who had many friends as teenagers were more likely to be liberal as adults, revealing a gene-environment interaction, the researchers reported.

Once someone's emotions predispose them toward a political philosophy, they tend to pay more attention to information that reinforces their position, said Peter Ditto, a psychologist at the University of California, Irvine, who has collaborated with Haidt. Ignoring contradictory information is easier than ever, given the proliferation of partisan news sources and blogs.

This fundamental gap is why liberals and conservatives often hit a wall while arguing issues with one another, Ditto said.

"I've never won a political argument," Ditto said. "You can never pin people down … These emotions organize our factual understanding of the world, and then you get stuck."

A search for common ground

On a personal level, people can often overcome political differences, because they like one another and give each other credit for good intentions, Ditto said. But he worries about a media environment where both sides treat each other with suspicion.

"There's no more sort of 'noble opponent,' where we differ on things, but we all have the same goals," he said.

So given our differences and our psychological impulses to divide and conquer, is there hope for a return to national political cooperation and goodwill? Can political parties and the media ratchet down the drama to better reflect the electorate?

"It's hard to see how this just spontaneously heals itself," Ditto said.

"Not without a major crisis," Haidt said.

People have looked into redistricting, reforming the primary process and other structural changes, McCarty said, but his research suggests the effects on polarization will be small.

"Maybe it was this [bipartisan] period from the 1930s to the 1960s that was the odd period of American history," he said. "Maybe our system is just conductive to polarization and there isn't really any small change that's going to take the edge off of our politics."