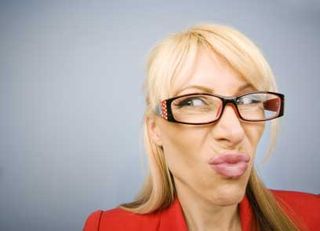 Disgust can manifest itself with widely typical physical reactions. It has also been linked to a person's sense of morals. Now scientists find a connection between disgust and political leanings. Image
(Image: © stockxpert)

People who squirm at the sight of bugs or are grossed out by blood and guts are more likely to be politically conservative, new studies find.

In particular, the squeamish are more apt to have conservative attitudes about gays and lesbians.

Lots of other research has tied politics to biology and behavior. Some quick background:

[Update 6/5: A note to those who don't "agree" with the findings of these studies: Social research does not typically yield findings that describe everyone in a group. Rather, tendencies are revealed. Sure, this result may not fit the bill for you and likely not for many other people you know. I've added a longer note about this on page 2 of the Comments section. --RRB]

In one of the new studies, Cornell University psychology professor David Pizarro and colleagues surveyed 181 U.S. adults from politically mixed swing states. They used a Disgust Sensitivity Scale (DSS), which offers various scenarios to assess disgust sensitivity, as well as a political ideology scale. They found a correlation between being more easily disgusted and political conservatism.

Then they surveyed 91 Cornell undergraduates with the DSS, as well as with questions about their positions on issues including gay marriage, abortion, gun control, labor unions, tax cuts and affirmative action. Participants who rated higher in disgust sensitivity were more likely to oppose gay marriage and abortion, issues that are related to notions of morality or purity.

The results are detailed in the journal Cognition & Emotion.

In a separate study in the current issue of the journal Emotion, Pizarro and colleagues found a link between higher disgust sensitivity and disapproval of gays and lesbians. In this research, they used implicit measures, which assess attitudes people may be unwilling to report explicitly or that they may not even know they possess.

The studies were funded by the university.

Morals and disgust are intertwined. Research earlier this year found that people react similarly to disgusting photographs by curling the upper lip and wrinkling the nose. When judging behavior, our disgust can actually make us feel physically sick.

Pizarro explains that disgust is evolution's way of protecting us from disease. Unfortunately, in his view, disgust is now used to make moral judgments.

Liberals and conservatives disagree about whether disgust has a valid place in making moral judgments, Pizarro argues. Some conservatives think there is inherent wisdom in repugnance, that feeling disgusted about something — gay sex between consenting adults, for example — is cause enough to judge it wrong or immoral, even lacking a concrete reason, Pizarro explains. Liberals tend to disagree, and are more likely to base judgments on whether an action or a thing causes actual harm, he said.

Studying the link between disgust and moral judgment could help explain the strong differences in people's moral opinions, Pizarro figures. And it could offer strategies for persuading some to change their views.

"People have pointed out for a long time that a lot of our moral values seem driven by emotion, and in particular, disgust appears to be one of those emotions that seems to be recruited for moral judgments," Pizarro said.

An interesting related aside to chew on: Research published in 2007 in the Journal of Applied Psychology found that people who think of themselves as having high moral standards often become the worst cheats because they pursue what they believe to be a moral end at all cost.