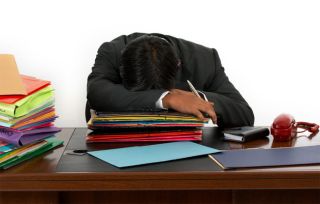 Your office or bedroom holds telltale signs of whether you are a conservative or a liberal, finds a new study. While political conservatives tend to keep a tidy, organized office, political liberals favor colorful, more stylish but cluttered spaces.

A person may hide their political ideology from others, including from pollsters, but the researchers were delighted to learn that a peek into subjects' living quarters or even workspaces could give that away.

Conservatives and liberals leave behind distinct "behavioral residue" that can be picked up by savvy scientists and possibly other observers, according to the study by New York University psychologist John Jost and his colleagues. The results are set for publication in a forthcoming issue of the journal Political Psychology.

The researchers took inventory of five office locations — a commercial real estate agency, an advertising agency, a business school, an architectural firm and a retail bank — all in a large U.S. city. They had observers check out the workspaces of 94 male and female employees. The subjects' average age was 37. The snoopers had no idea of the workers' political orientation.

Liberals' offices were judged as significantly more distinctive, comfortable, stylish, modern, and colorful and as less conventional and ordinary, in comparison with conservatives' offices, Jost said.

The researchers also sent snoopers into the living spaces of 76 undergraduates at the University of California, Berkeley, arriving at similar results.

"Conservative rooms tended to be cleaner, more brightly lit, better organized, less cluttered, and also more conventional and ordinary in terms of decoration," Jost said during a panel discussion on "The Neuroscience of Elections and Human Decision-Making" at NYU, adding: "Conservatives' rooms were rated by independent raters as better organized and tidier in general."

The findings agreed with a link found by Jost's team between two personality traits and political ideology. In personality tests of thousands of college students, Jost found that liberals tended to score higher than conservatives on one key measure called openness to experiences, which includes holding wide interests, and being imaginative and insightful.

"I think it's a truly fascinating possibility that the left-right distinction, which emerged over 200 years ago in response to the French Revolution and continues to be the single best way of understanding ideological differences today, may be rooted in fundamental human needs for stability vs. change, order vs. complexity, familiarity vs. novelty, conformity vs. creativity, and loyalty vs. rebellion," Jost told LiveScience.

(The terms of left-right political leanings was originally based on the seating arrangement of those in the French parliament during the time of the French Revolution.)

He added, "It may be that conflicting tendencies in human nature play themselves out in the political sphere as the struggle between right and left."

But for a self-proclaimed conservative or liberal whose office conditions do not match these findings, say a conservative living in a cluttered room, Jost said, that's to be expected.

"What we have observed are just differences on average between liberals and conservatives, and the variability around these averages is considerable," he said, giving the example that while on average men are taller than women, plenty of tall women and short men are walking around.