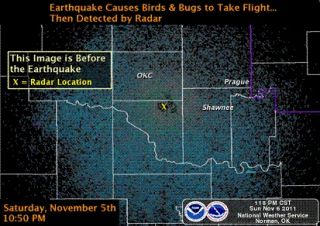 The NWS radar just before the earthquake struck.
(Image: © NWS)

For weather watchers in Oklahoma — the heart of Tornado Alley — the weekend's record-breaking earthquake created a curious blip on their radar screens.

Weather radars at the National Weather Service in Norman, Okla., spotted what looked like bugs, bats or birds (or all three) swarming in the air just after the 5.6 magnitude earthquake struck the state. The quake hit on Saturday (Nov. 5) and was the largest in the state's history. The damage was minimal, but the quake was felt as far away as Chicago. Earlier in the day, a magnitude 4.8 foreshock rumbled in central Oklahoma.

The magnitude 5.6 quake struck about 44 miles (71 kilometers) east-northeast of Oklahoma City, according to the U.S. Geological Survey.

Earthquakes are not unusual in Oklahoma, according to the USGS. Most are too small to be felt. From 1972 to 2008, the state had two to six quakes per year, scattered across its east-central part. In 2009, the rumbling grew, with 50 earthquakes in the state, many large enough to feel, which has started a debate over the possible link to natural gas drilling.

But flying critters on the weather radar? That's actually not an oddity. Weather radars pick up all kinds of things: birds, dust, rain, wind turbines. In Harmon County, in southwest Oklahoma, every day during the summer the weather radar picks up bats scattering from a big cave there, said Ty Judd, a meteorologist with the NWS in Norman.

"I'd say it's pretty much a certainty that that was bugs and birds that were scattering," Judd told OurAmazingPlanet.

The radar images after the quake looked like what meteorologists typically see when birds take flight, but "this was on a little bit bigger scale," Judd said.

Incidents of animals acting strangely during earthquakes have been in the news lately, and this may just be the latest.

Judd was at home when the earthquake hit. He said it shook his house for about 25 seconds and that it was "very surreal."

"The trees were shaking and I guess the birds just didn't want to sit up there," Judd said.