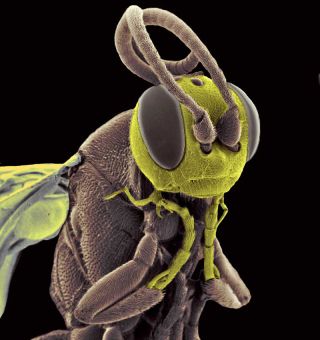 Some mean-looking outlaws are in a showdown to snag this year's Ugly Bug title, with the blood-sucking bedbug, dung beetle and a sinister wasp that hatches deadly larvae contending for a top spot.

The ugliest critter will snatch the title from the 2010 winner, the assassin bug.

The Ugly Bug Contest was started in 1997 by Northern Arizona University’s Marilee Sellers and initially was a local contest. In 2008, the contest moved to the Web when Arizona State University's Charles Kazilek, also known as "Dr. Biology," became involved.

The hope is that as the public votes for the ugliest bug of 10 contenders, they'll also learn more about these insects and get a glimpse of taxonomy, or the scientific classification of living things.

The organizers chose a Western theme for this year's contest — "The Good, The Bad, and The Ugly Bug" — as a way to highlight not only the nefarious nature of these bugs but also their positive sides. For example, although the dung beetle feeds on animal feces, some species also help to fertilize soil by rolling waste into tiny balls that they bury underground to snack on later.

Other ugly bug candidates include the green lacewing, flea beetle and the sweetly named but aggressive damsel bug, which catches its prey with its forelegs — similar to a mantis — and holds it steady while it sucks out its victim's body contents. [See magnified photos of the ugly-bug contenders]

All of the images in the contest were taken using a scanning electron microscope, which captured vivid, highly magnified images, allowing viewers to see details of the bugs that are too miniscule to observe otherwise. The original scans are in black and white and are available on the site, but the researchers added bright colors to each insect's image in the voting section.

Currently, the seed beetle and flower beetle are neck-and-neck. Bug fans have until Dec. 15 to choose the most intriguing or stomach-turning bug by voting here.