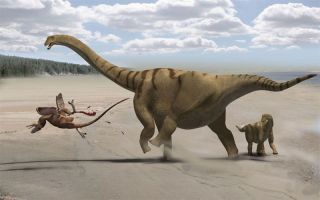 The researchers know the bone belonged to a type of sauropod, though they aren't sure of the genus. Here in this illustration, a sauropod called Brontomerus protects her baby from a predator.
(Image: © Francisco Gascó under the direction of Mike Taylor and Matt Wedel)

LAS VEGAS — It's official, long-necked sauropod dinosaurs once roamed every continent on Earth — including now-frigid Antarctica.

The discovery of a single sauropod vertebra on James Ross Island in Antarctica reveals that these behemoths, which included Diplodocus, Brachiosaurus and Apatosaurus, lived on the continent in the upper Cretaceous Period about 100 million years ago.

"Sauropods were found all around the world, except Antarctica," said study researcher Ariana Paulina Carabajal, a paleontologist at the Carmen Funes Municipal Museum in Plaza Huincul, Argentina. "Until now."

Paulina Carabajal reported the find Nov. 3 here at the annual meeting of the Society for Vertebrate Paleontology.

Fossils at the South Pole

Paulina Carabajal and her colleagues aren't the first to find a dinosaur in Antarctica. Paleontologists turned up an ankylosaur bone in 1986, and since then, there have been other dinosaur specimens, including duck-billed dinosaurs. Nonetheless, the continent hasn't been as fertile a fossil-hunting ground as other regions. [Image Gallery: Dinosaur Fossils]

Even in the summer, when ice and snow retreat in some coastal areas, finding fossils is difficult, she said. Daily cycles of freezing and thawing crack bones to pieces, so "you will never find a complete bone," Paulina Carabajal said. And after about 8 inches (20 centimeters) of digging, you run into the permafrost, which is too hard to excavate without waiting for it to melt for a day or two.

Paulina Carabajal and two colleagues flew to James Ross Island by helicopter, which dropped them off with their camping equipment.

"When the helicopter leaves you there just with boxes and goes back to the base … you feel like ‘Ooh, what am I doing here?’" Paulina Carabajal said.

But she soon fell in love with the peaceful, chilly island, she said, and the group began surveying for fossils. They found a number of marine reptiles, fish and invertebrates, Paulina Carabajal said, but no dinosaurs until the end of their stay, when they went to the site where the first Antarctic ankylosaur was found. There, at the surface, they found a single broken sauropod vertebra.

"We cannot do much with only a vertebra, so we don't know the genera or species," Paulina Carabajal said. "But we know it's a titanosaur, it's a kind of sauropod that's very common in South America."

Long-tailed, long-necked titanosaurs may have weighed more than 100 tons. They were herbivores, armored with tough, beadlike scales.

"It was warm enough for these animals to live there," she said.

Beyond showing these long-necks lumbered across every continent, the find may be useful for revealing where and how the animals traveled, Paulina Carabajal said. No one yet knows how sauropods spread across the globe.

"It will be interesting, with time, with more information, to know how these dinosaurs spread around the world using Antarctica like a bridge," she said.