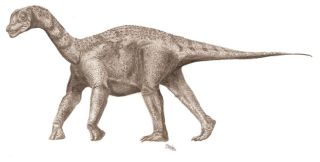 Drawing of a juvenile titanosaur. Note the bony scales on its back that researchers suggest protected it from predators.
(Image: © Deverson da Silva)

Titanosaurs were among the largest creatures to ever walk the Earth, with some gargantuan examples believed to have weighed more than 100 tons. Bony scales dotted their hides, but their purpose remained a mystery.

Analysis of titanosaur embryos suggest these scales helped protect the giants during their vulnerable youth, guarding them against predators.

Paleontologist Thiago Marinho at the Federal University of Rio de Janeiro analyzed data on titanosaur eggs discovered in Patagonia in Argentina in 1997. The embryos within had evidence of skin that bore a number of bumps. Comparison with skin patches seen in alligator embryos suggested the dinosaur bumps might one day toughen up into bony scales known as osteoderms.

The osteoderms seen on adult titanosaurs were too small and spongy to provide much real defense. Marinho noted such body armor would have been far more effective for young titanosaurs than adults, protecting against the bites of marauders such as theropods—carnivorous dinosaurs that included T. rex—as well as crocodile-like predators known as crocodyliforms.

Such armor would have proven especially helpful for young titanosaurs, since no fossil evidence exists that titanosaurs displayed much in the way of parental care, Marinho added.

"Although the titanosaurs comprise some of the biggest land animals to walk on Earth, we have to keep in mind that they were born from eggs 30 centimeters [12 inches] in diameter," Marinho said. While such eggs might be huge by modern standards, the 1-foot-long or so hatchlings resulting from them "wouldn't stand a chance against big theropod dinosaurs. But they might have had an effective defense system against small theropods and terrestrial crocodyliforms if they had a cuirass [protective covering] composed by side-by-side osteoderms."

Marinho figures that as titanosaurs grew, they absorbed as much calcium as they could to form their massive skeletons, including from their osteoderms, making these bony scales more porous and spongy.

"Extant crocodilians, especially juveniles and young adults, do absorb calcium from their osteoderms when their diets do not supply the calcium demand for their metabolism," he explained. As the dinosaurs grew older, the bony scales "would have become obsolete accessories, as the size of the titanosaurs was itself a defense system."

Other dinosaurs were known to have possessed bony scales as well, such as the predatory theropod Carnotaurus. While scant fossil evidence of young or embryonic theropod skin has been found as yet, the notion that juvenile theropods might have had bony scales to protect them "can't be discarded," Marinho said.

The findings were posted last week to Nature Proceedings, which is not peer-reviewed.