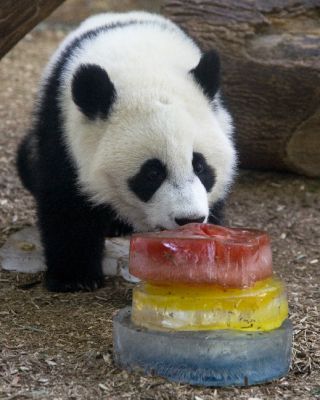 ATLANTA — Zoo Atlanta's celebrated new panda, Po, turned 1 year old today (Nov. 3). To celebrate the milestone, his caretakers gave him a fruit-filled ice cake, shaped like a "1," and a few other gifts — though Po's mom spoiled the fun by unwrapping them first.

The exhibit's viewing area here was packed with panda peepers. Kids weaved through the crowd, pressed up against the glass barrier and waved to Po, who is named after the animated star of the "Kung Fu Panda" movies. A ripple of tiny voices yelling "Hi panda!" spread though the audience as Po milled about with his giant panda mom, Lun Lun.

Being an energetic new toddler, Po couldn't sit still while waiting for his birthday presents. A handstand on top of his tree-branch playset brought childlike smiles to the crowd. But when it was time to open presents, Po's shy side was on display.

The zoo's staff had gift-wrapped a brand new orange traffic cone inside a Po-sized box. The box was also filled with the scent of mouthwash and cinnamon. Pandas love to sniff; Yang Yang, Po's father, loves the smell of Tabasco sauce. Lun Lun prefers lavender. Po didn't get the first sniff of the gift, however. Lun Lun nosed her way to the box and tore off the wrapping paper while Po watched from a small alcove at the rear of the pen.

After Lun Lun had her way with Po's ice cakes, she finally snorted her approval and moved on so little Po could enjoy his treats.

Po was the only giant panda cub born in the United States in 2010 (the National Zoo had a pregnancy faker), and the celebrated cub has been quite cautious, the zookeepers have said. He tends to treat new items with suspicion if his mother has not inspected them, so seeing him hang back during the birthday party was not a surprise.

"He's getting better about it and becoming more and more adventurous," said Rebecca Snyder, the zoo's curator of mammals. His cautiousness isn't cause for concern, Snyder said.

"He's always going to take his cues from his mom," Snyder said.

Now that Po has taken a liking to solid foods like bamboo, he has been packing on the pounds. Po has plumped to nearly 50 pounds (22 kilograms), up from 11 pounds (5 kilograms) in February and just 11 ounces (331 grams) at his first exam in November 2010.

Lun Lun has yet to wean Po. That may be because he was born late in the season, Synder said. The zoo staff will let Lun Lun wean on her own terms, which they suspect will be in May, but could come when Po is 2 1/2 years old.

In the meantime, the trainers are teaching young Po the ways of the zoo panda. His first task is to learn to move through openings in the exhibit whenever the trainers say "shift." If he obeys, he earns a treat for positive reinforcement and a whistle toot as conditioning. The "shift" command is crucial because it helps the staff order him around for cleaning and restocking their bamboo.

Next, the zoo trainers will teach Po the first step of what's called body presentation. This is when a trainer puts a fist to Po's nose and teaches him to follow its movement. Once he's got that down, the trainers use this basic move to teach a number of more complicated commands.

But that hard work will come on another day. Today was purely for Po pleasure. Snyder said he seemed to be enjoying the commotion, but as the initial throng of onlookers began to disperse, Po had retreated to a corner of the exhibit, back to the crowd, lost in his own little world with a splinter of ice cake.