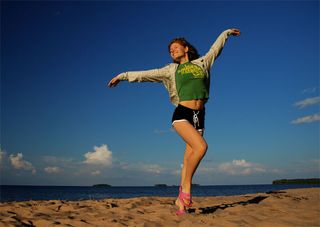 Home testing for the human papillomavirus (HPV) may be a useful way to screen for and prevent cervical cancer among women who don't have access to pap smears or don't chose to get them from doctors, a new study says.

However, the home test also had a high false-positive rate, meaning many women who tested positive for HPV and underwent more invasive tests were later found not to have pre-cancer or cancer.

Despite this limitation, this method of testing appears to be a promising alternative to pap smears for developing countries, where the disease burden of cervical cancer is largest, said study researcher Attila Lorincz from Queen Mary, University of London.

A home test could also be useful in resource-limited areas of developed countries, including the United States, or for women who would not otherwise get pap smears, Lorincz said.

To perform the home HPV test, women used a brush to collect samples of cells from the cervix. The sample was then picked up from the women by nurses and sent to laboratories for testing.

Because this HPV test does not require women to go to a clinic, it could potentially increase the number of women who receive cervical cancer screening, Lorincz said. In developing countries that use the test, Lorincz said he would expect to see a large reduction in cervical cancer cases within three to five years.

The home test was also preferred by women in the study, the researchers said.

The study will be published online tomorrow (Nov. 2) in the journal the Lancet.

Cervical cancer kills 273,000 women worldwide every year, and it is more prevalent in poorer countries where women have little or no access to screening. Infection with HPV can cause cervical cancer.

The study included more than 20,000 women between the ages of 25 and 65. Women were randomly assigned to receive a home HPV test, or to visit a clinic for a pap smear. Women who tested positive for HPV, or women who had suspicious pap smears, were referred for a biopsy procedure called a colposcopy.

Results were available for 9,202 women in the HPV screening group and 1,1054 in pap smear group.

About 10 percent of the women in the HPV testing group tested positive for the virus, and about 0.4 percent of those screened with pap smears had abnormal results — all of these women required colposcopies to further test for cancer.

However, only 12 percent of women in the home test group who were referred for a colposcopy actually had pre-cancer or cancer, compared with 90 percent in the pap smear group.

Use in developed countries

The research is "important work for many places in the world," said Dr. Mark Schiffman, a senior investigator at the National Cancer institute who studies HPV infection, and who was not involved in the new study. However, "I don’t think this [study] is directly applicable, as performed, to low resource settings in the U.S.," Schiffman said.

That's because pap smears performed in the United States, and the subsequent examination of the cells, detect more cancers than those performed in Mexico, Schiffman said.

That's not to say home HPV testing couldn't have a value in this country, but more studies are needed to investigate this, Schiffman said.

HPV testing is currently available in the United States in conjunction with the pap smear test for women over 30, but it is not universally recommended or widely performed.

To be practical for more developed countries, researchers would need to priotitize the women with positive home HPV test results so that only those most at risk of having cancer undergo biopsy, said Eduardo Franco, a cancer epidemiologist at McGill University, in Montreal. This could be done by having HPV-positive women undergo a pap smear, Franco said.

The study was funded in part by Qiagen, a company that manufactures an HPV test. The company had no role in the design of the study, interpretation of data or writing of the report, the researchers said.

Pass it on: HPV testing at home may be a useful alternative to pap smears in developing countries.