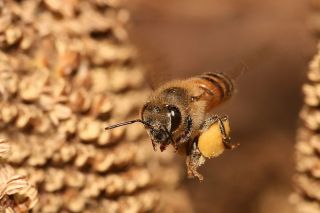 A semi-trailer truck hauling 460 beehives overturned Sunday afternoon on an interstate near St. George, Utah, releasing a swarm of 25 million bees into the air. Several people were stung, including the truck driver, his passenger and those helping out at the scene of the accident.

"It was insane," Corey Jennings, an onlooker who was stung by the bees, told The St. George Daily Spectrum. "The swarm of them was so big. You couldn't see anything else."

A similar incident happened in July, when 14 million bees, as well as a river of honey, flowed out of a wrecked semi in Idaho, and 17 million bees escaped a fatal truck crash in Minnesota last year. Why so many highway accidents involving bees?

The uptick results from the fact that more and more honey bee colonies are being transported around the country via highways in recent years. Local bee populations are rapidly dying off from a little-understood disease called "colony collapse disorder" (CCD), which is marked by one tell-tale sign: When beekeepers open a hive in the spring, they find only the live queen, her brood, and the honey that the bees had stored up for the winter; all the adult bees, and even their carcasses, have mysteriously disappeared.

The nation's beekeepers have reported a loss of around 30 percent of their hives to CCD each year since 2006, and so more and more commercial bee colonies are being trucked cross-country from farm to farm to play the vital role of pollinating crops — especially nuts, berries, fruits and vegetables.

"The number of managed honey bee colonies [in the U.S.] has dropped from 5 million in the 1940s to only 2.5 million today. At the same time, the call for hives to supply pollination service has continued to climb. This means honey bee colonies are trucked farther and more often than ever before," the U.S. Dept. of Agriculture states on its website.

Unfortunately, some apiologists — honey bee scientists — suspect that the rise of the bee-trucking industry may be contributing to the species' decline. A United Nations study from earlier this year found that industrialized hives create ideal breeding conditions for the pathogens and fungal diseases that may be killing the bees. Transporting the hives from farm to farm then spreads the pathogens to local bee populations.

Researchers are concerned that the loss of pollinators could eventually lead to food shortages. According to the U.N., 70 percent of the 100 crop species that provide 90 percent of the world's food are pollinated by bees.