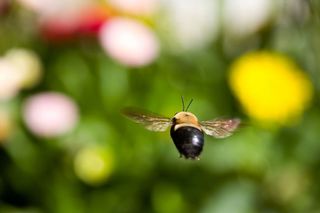 Bees learn the locations of flowers, and optimize their routes between them.
(Image: © Dreamstime)

Bees never seem to disappoint. Organized, selfless, altruistic and industrious, they are the primary pollinators of the world's flowers, the makers of beeswax, propolis and honey. They're expert communicators and fantastic fliers. They do many things so well that we don't understand how they do them.

Now, one more skill can be added to the list of inexplicable bee attributes. Biologists from Queen Mary's School of Biological and Chemical Sciences at the University of London have found that, through an unknown method, bees calculate the most efficient route possible between all the flowers in their environment, minimizing the energy required to gather nectar. With very simple brains, they solve complex routing problems that would confound most humans.

"Unlike computers or mathematicians who can solve simple 'traveling salesman problems' by comparing the lengths of all possible routes by brute force calculations , a bee finds similar solutions with a brain containing just 950,000 neurons," Mattieu Lihoreau, a postdoctoral fellow who led the new research, told Life's Little Mysteries, a sister site to LiveScience. That's a mere hundred thousandth of the number of neurons in our own heads. [Are Big Brains Smarter?]

What's bees' secret, and can we learn anything from their efficient buzzing?

Beelines are the best routes

Lihoreau and his colleagues arranged six artificial flowers in such a way that a simple "nearest neighbor" model of navigating between them would not be fastest. In other words, of the 720 possible routes between the six locations, there were options that were more optimal than just flying from one flower to the nearest unvisited one — the simplest foraging approach. As the bumblebees explored the area, the researchers recorded which flowers they visited and in what order.

As detailed in the August 17 issue of the journal Biology Letters, the bees found the shortest possible route after 80 foraging expeditions. Because bees have such simple brains, Lihoreau explained, "[they] must be finding the shortest route using a simple solution. How exactly the bees proceed is not fully understood yet."

To track the route between their nest and a single flower, bees use a number of navigation tools, including the location of the sun, visual memory of landmarks, memory of flight directions and estimation of flight distances. According to the researchers, the insects most likely use a combination of these tools to develop more complex routes between multiple flowers — but how?

One possibility is that they keep track of the shortest route they've followed so far, and compare new routes to it. "If the new route is shorter than the reference 'shortest' route, they may abandon the old route and adopt the newer one," Lihoreau, who now works at the University of Sydney, told Life's Little Mysteries in an email. Gradually, they optimize the route. [The 5 Smartest Non-Primates on the Planet]

Can bees teach us anything about how to plan the order in which to run our errands, or how best to navigate the supermarket? Lihoreau says no: "We are much better than them at planning routes ahead and we have much more sophisticated navigation tools at our disposal (e.g. maps, GPS)."

However, we can learn how to optimize designs for information networks whose routes can't be planned ahead of time. "A clear understanding of how bees solve complex routing problems without computer or GPS assistance has the potential to unravel simple movement rules [for optimizing] complex networks," he wrote. "For instance, we can imagine that 'bee-inspired' algorithms could ultimately be used to improve designs of fast-growing information networks (e.g. mobile phone networks, Internet) or transport networks (buses, trains) on which our modern societies rely."

Before that happens, we'll have to figure out what algorithm they actually use.