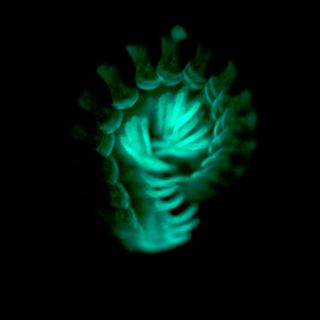 A prolonged exposure taken in the darkroom shows the greenish glow of a Motyxia millipede, which scientists have found uses the glow to warn predators of their toxic oozing cyanide.
(Image: © Paul Marek)

More than 12,000 species of millipede are currently known to science, but researchers suggest the vast majority remain undiscovered. The real number of species could actually be as high as 100,000 or so.

Of all these creepy crawlies, eight species are bioluminescent, meaning they can glow just like fireflies and glowworms. All are part of a genus known as Motyxia. [Gallery of Glowing Creatures]

"California is the only place on the planet where you can see glow-in-the-dark millipedes," said researcher Paul Marek, an evolutionary biologist at the University of Arizona. "The Santa Monica Mountains, the Tehachapi Mountains and the southern Sierra Nevada Mountains, all of which are in southern California." [See photos of glowing millipede]

When night falls in these mountains, these millipedes erupt from the ground.

"They spend the day burrowed beneath the soil and leaf material, but even though they are blind, they somehow sense when night falls, and come to the surface to forage and mate and to go about their millipede business," Marek said. It currently remains completely unknown how the millipedes detect the fall of night.

A greenish-blue light is not the only thing these millipedes give off, however.

"When they are disturbed, they ooze toxic cyanide and foul-tasting chemicals from small pores running along the sides of their bodies as a defense mechanism," Marek said.

The reason why these millipedes glow is a mystery. They are blind, adapted to a lifestyle primarily spent underground, so they cannot use their glow to send messages to other members of their species. Also, while deep-sea angler fish dangle glowing lures in front of their mouths to attract prey, Motyxia are vegetarians just like all other millipedes, feeding mostly on decaying plant material. so they have no need to pull in victims.

Still, a number of poisonous millipede species active during the day are thought to display bright colors to warn predators that they possess toxins and to steer clear. Since Motyxia are instead out in the dark, Marek and his colleagues reasoned "they use their greenish glow in place of a warning coloration," he said.

To test this idea, the researchers experimented with both luminescent millipedes and nonluminescent ones, reckoning that glowing millipedes would be attacked less than nonglowing ones.

"Studying the evolution of warning coloration helps us understand basic evolutionary processes like natural selection and how evolution produces the diversity of life on the planet," Marek said.

To start, Charity Hall, Marek's wife and a metalsmith, made a bronze cast of a millipede. This was used to create molds for 300 fake millipedes from clay. Half of those were painted with an artificial, long-lasting glowing paint matched to the color and brightness of the millipedes, while half were not.

"We had fun making the clay models for the experiment," Marek told LiveScience. "It involved finding suitable clay that would not be inherently attractive or repellant as a result of taste, smell, etcetera."

The researchers also collected real glowing millipedes from Giant Sequoia National Monument in California, from the species Motyxia sequoiae. These are each about 30 millimeters long and 1 gram in mass on average.

"Motyxia are extremely common out there," Marek said. "If you sit there in a moonless night, the ground will look like the starry night sky up above, from all those millipedes glowing in the dark."

The live millipedes were split into two groups. One was covered with paint that concealed their natural glow, while the other was left untreated.

In their field experiments, the researchers took all these millipedes — real and fake, glowing and nonglowing — back to Giant Sequoia National Monument. Individuals from each group were placed singly in random order 16 feet (5 meters) apart. To make sure the live millipedes would not walk out of the experiment, "we used a fly-fishing knot gently tied between their segments to tether them to the ground," Marek explained.

"Fieldwork involved staying up late and then waking up pre-dawn to finish the experiment," Marek said.

The next morning, the researchers, including students Sergio Molina and Eric O'Donnell from Pima Community College in Tucson, Ariz., went to collect the real and fake millipedes and analyze the results.

"It was just carnage," Marek said. "We were really surprised at the predation rate on these millipedes. Overall, about one-third of them, both real and fake, had been attacked." [Top 10 Deadliest Animals]

When it came to the live millipedes, four times as many nonglowing ones showed evidence of attacks compared with their glowing companions. Similarly, in the clay group, nonluminescent models were assaulted twice as often as luminescent ones.

When the researchers matched attack marks on the remains with teeth in rodent skulls collected at the California Academy of Sciences, they concluded the millipedes' most likely predators are small rodents such as the grasshopper mouse (Onychomys torridus).

"Remarkably, most of the predation marks were localized to the head, even in the clay models," Marek said. "Those predators were able to tell the head from the tail end and go for the head first."

"They do this to knock out the 'central command center' first — the brain, eyes and nerve cord — after which the rest of the body is incapacitated," Marek added. "Mice and other rodents are very smart predators and foragers. They quickly learn efficient means to obtain food."

"They use a different mechanism than fireflies or glowworms, which use an enzymatic reaction," Marek said. Instead, "the millipedes have a photoprotein that is similar to the photoprotein of the jellyfish Aequorea victoria."

"This is just the tip of the iceberg for the fascinating story of bioluminescence in Motyxia," Marek added. "We still don't know a lot of things about their biology and the circumstances under which luminescence evolved."

The scientists detailed their findings in the Sept. 27 issue of the journal Current Biology.