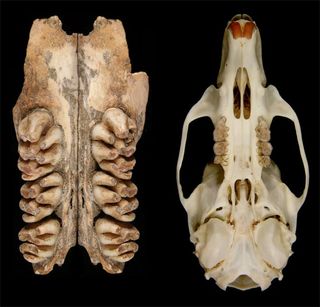 Here, the upper tooth rows of Timor's extinct giant rat (left), the biggest rat that ever lived, compared with the skull of a black rat (right), one of the most common rats, weighing some 5 ounces (150 grams). The skull of the black rat shown here is 35 mm long.
(Image: © Ken Aplin, CSIRO.)

Watch out Heathcliff, there's a rat out there bigger than you. Or at least there was. Just a couple thousand years ago, the world's largest rat, weighing more than the average house cat, scuttled about what is now East Timor of Southeast Asia.

The skeletal remains of the robust rodent were found in a cave, researchers announced today. The excavations also turned up 13 other species of rodents, 11 of which are new to science, with eight of the rats estimated to have weighed more than 2 pounds (1 kg).

When alive, the giant of the bunch weighed some 13.2 pounds (6 kilograms). For comparison, a house rat weighs on average 5 ounces (150 grams). Today's heftiest rats weigh around 4.4 pounds (2 kg) and live in rain forests in the Philippines and New Guinea.

Carbon dating suggests the animal lived up until 1,000 to 2,000 years ago, along with most of the other Timorese rodents found during the excavations. Only one of the smaller species found is known to survive on Timor today, the researchers say.

"People have lived on the island of Timor for over 40,000 years and hunted and ate rats throughout this period, yet extinctions did not occur until quite recently," said study researcher Ken Aplin of CSIRO, adding that the arrival of humans to an area doesn't necessarily have to equate with extinctions. (CSIRO is the national government body for scientific research in Australia.)

"Large-scale clearing of forest for agriculture probably caused the extinctions, and this may have only been possible following the introduction of metal tools," Aplin said.

East Indonesia is a hotspot for rat evolution, Aplin said. In fact, each of the islands of eastern Indonesia evolved it own unique rat species. Aplin also has found six new rat species in a cave on the island of Flores.

Though most of Timor today is arid, it was once covered by lush rain forests. Even so, Aplin doesn't rule out finding other "new" creatures today.

"Although less than 15 percent of Timor's original forest cover remains, parts of the island are still heavily forested, so who knows what might be out there?" Aplin said.

Aplin and Kris Helgen of the Smithsonian Institution detail their findings this week in the Bulletin of the American Museum of Natural History.