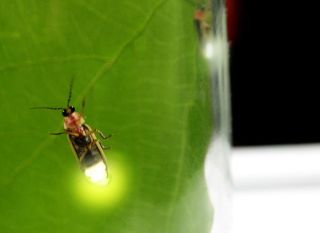 Female fireflies are attracted to flashier males. Unfortunately, so are the insects’ predators, a new study suggests.

Summer evenings in firefly territory might look to us like nothing more than a dazzling light show. But to females of the fireflies species Photinus, the air is abuzz with mating opportunities.

The bright flashes generated by the male fireflies are signals designed to catch the roving eye of an interested female. If she's feelin' one of the males, the female flashes back in response. Previous research on several firefly species has shown that females hooked up more readily with males that flash longer and faster.

"The obvious preference for males that can flash more conspicuously is somewhat similar to the way peahens prefer peacocks that have larger, more colorful tails," said lead researcher Sara Lewis of Tufts University.

While investigators are still looking into why female fireflies dig males that bring the bling, another mystery that's been puzzling scientists, she says, is the question of "what's keeping these males from evolving longer and faster flashes?" since it's so advantageous.

Lewis and her team wanted to find out what the potential costs were to being a showier firefly. So using electronic fake fireflies, the researchers ran an experiment to see if conspicuous flashes drew more than just the attention of potential mates—and in particular, predators.

They found that predatory fireflies known as Photuris were more drawn to fake firefly signals compared to non-flashing but otherwise identical controls. Also, when the flash signals were more frequent, they were even more likely to attract the predators.

Photuris fireflies are sometimes referred to as femme fatale fireflies because the females mimic the light signals of other firefly species to attract, kill, and eat them.

The findings will be detailed in the November issue of the journal American Naturalist.

Although the experiment involved only fake fireflies, Lewis suspects that the predators affect the evolution of firefly signals by "eavesdropping" on their prey, thus limiting just how conspicuous the fireflies’ flashes can get.

So every night, she adds, male fireflies are out there flying a fine line between sex and death.