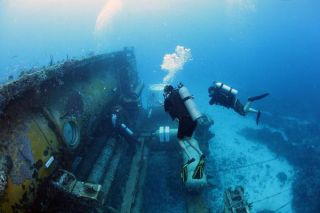 An underwater lab is hosting scientists and technicians who are on a 10-day mission to research ways to protect or even restore damaged coral reefs.

The submerged habitat named, called Aquarius, lies 47 feet (14 meters) below the ocean surface about four miles (6.4 kilometers) off Key Largo, in the Florida Keys National Marine Sanctuary. The structure is about the size of a school bus and houses approximately 400 square feet (37 square meters) of scientific laboratories and living quarters for up to six researchers. These "aquanauts" can live and work underwater for the entire length of their mission; the accommodations include toilet, shower, microwave oven, trash compactor, refrigerator, air conditioning and computers linked back to shore.

The research team has been swimming in and out of the lab since Sept. 13 to evaluate how seaweeds and fish affect the health of coral reefs worldwide, a key concern considering the impact that warming and increasingly acidic ocean waters are having on many coral species.

Past research has shown that the natural defenses of seaweeds can harm coral, and that plant-eating fish can control the growth of such seaweed. Since certain fish species eat specific seaweed species and some seaweeds are more damaging to corals than others, scientists would like to learn which herbivorous fish might be most helpful for endangered reefs.

"I've been working for many years from the seaweed's 'perspective' — strange, I know, but true," marine ecologist Mark Hay of the Georgia Institute of Technology told OurAmazingPlanet by email from the underwater lab. "From this I knew which species were most susceptible to being eaten, how they defended themselves using chemical feeding deterrents, structures, adaptations [the seaweed had] to grow at night when fish herbivores were sleeping, but not who was making them disappear by feeding on them."

Hay and his colleagues are investigating which fish dine on which seaweeds and which combinations of fish would be most critical for preventing seaweed damage to corals, findings that could help "conserve and even restore reefs," Hay said.

The researchers swim in and out of the station through a "moon pool" — essentially a hole in the bottom of the lab. The pressure of air within the station "keeps pushing on the water and keeps it from flooding the lab," Hay explained.

The lab helps scientists remain on the ocean floor, a strategy known as saturation diving. This give them more time to dive and get their work done, by eliminating decompression time. The pressure of 47 feet of seawater is about 2.5 times greater than the atmospheric pressure found at sea level, and prolonged swimming under such pressure causes the body's tissues to absorb nitrogen from breathing gas. This nitrogen would cause "the bends" — decompression sickness — by generating harmful and painful bubbles if a diver ascended too quickly. At the end of a mission, aquanauts will undergo 17 hours of decompression in a chamber within Aquarius before heading back up.

A very large buoy floating above and connected to Aquarius holds a generator, air compressors, water tanks and communication antennas, supplying the station with power, air, water and Internet and phone access. Drinking water is brought down in jugs, while food, books, clothing, electronics such as Hay's iPad, and other items come in pressurized containers "like your grandmother's pressure cooker," Hay explained.

"If we seal a container — say, a jar — on the surface to keep out the water, dive it into Aquarius and try to open it, we can't because the pressure pushing it closed is too great," he explained. "However, if we put it in a pressure cooker, seal it shut, pressurize it to the equivalent of 50 feet deep and bring it into the habitat, then it opens easily."

In terms of dining, "the staple is freeze-dried camping food," Hay explained, "Tastes fine, but very high-cholesterol and very high-sodium." This gets microwaved or mixed with hot water. "We also get some fresh fruit, and some of the staff's wives and girlfriends occasionally cook real food and send it down."

During the mission, the researchers are investigating changes in Atlantic Ocean reef communities near Aquarius. They have built 32 cages, each 6 feet by 6 feet by 3 feet (2 metera by 2 meters by 1 meter), to enclose different species, such as stoplight parrotfish and redband parrotfish, to see which herbivores can best control harmful seaweed species.

"The particular biodiversity of herbivores may be as important as the density, or mass, of herbivores in determining the structure, function and health of reef communities," Hay said. "We know too little of the species-specific effects of reef herbivores, how effects of multiple species sum to produce an overall effect, or which particular mix of herbivores is critical for suppressing aggressive seaweeds to maintain reef function."

Aquarius is owned by the National Oceanic and Atmospheric Administration and managed by the University of North Carolina-Wilmington.

"It is small," Hay said of the lab, "but the group here is a good one and we get to spend eight hours or more outside diving, which relieves the 'cabin fever' aspects. This is my third time using an underwater habitat — twice in Aquarius and once long ago in Hydrolab, a much smaller habitat — and the freedom to dive this much more then pays back the aspects of being unable to come to the surface.

"It is one of my favorite experiences. If you are a marine scientist and like field work and diving, this is the place to be."